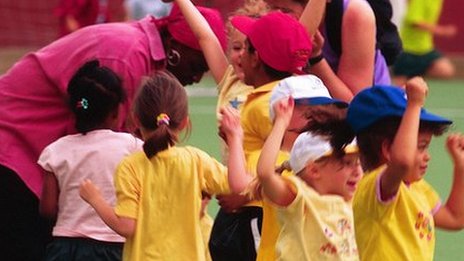 After-school activities can include anything from sports to chess

Childcare groups have reacted angrily to government plans to allow one member of staff to look after as many as 30 children in after-school clubs.

Childcare Minister Liz Truss announced plans to scrap the present 1:8 staff-child ratio, and bring it in line with teacher-child ratios in infant schools.

She said schools would no longer have to alter staff numbers and fill forms “just because the clock struck four”.

We have strong objections to the removal of the current ratios”

A Department for Education spokeswoman said the ratios would be left up to head teachers to decide, but that the maximum staff-to-child ratio would reflect the infant class size limit of one qualified teacher to 30 children. But staff would not always be teachers as children would be doing a wide range of activities, she said.

She added that the plans included further proposals to free providers and schools from the burden of red tape and form filling tied to registration of breakfast- and after-school clubs.

There will also be a relaxation of what is expected from such clubs in terms of the way they educate the four-year-olds attending them – currently they are expected to conform to guidance in what is know as the Early Years Foundation Stage.

The plans come after Ms Truss abandoned proposals to increase the childcare ratios for early years in June this year after intervention from the Deputy Prime Minister Nick Clegg.

In her speech in London on Thursday, Ms Truss said the plans were about making it easier and cheaper for parents to balance their working lives with childcare responsibilities.

“But I think these conditions present an opportunity, because a changing economy means that parents need affordable available childcare more than ever,” she said.

She also built on previous announcements urging schools to extend the period of time they are open, saying : “It’s about the fact that we have school buildings across the country sitting empty for hours of each day”.

The National Day Nurseries Association’s chief executive, Purnima Tanuku, said: “We have strong objections to the removal of the current ratios and qualified staff in out-of-school care for five- to seven-year-olds.

“The present ratio is 1:8 with a qualified manager, the new proposals just states ‘sufficient numbers of staff’.

“A good provider with strong management will have a real understanding of what quality means, but a weaker setting may not.

“While we understand DfE wants to allow some flexibility by allowing providers to use professional discretion, it makes it a grey area, open to misinterpretation.

“Parents need to know the care they choose for their young children is properly regulated and monitored and for that to happen, the balance between regulation and flexibility must be correct.”

Neil Leitch, chief executive of the Pre-School Learning Alliance, said: “Not content with having to do a reversal of the original proposals she put forward – where there was overwhelming opposition from parents, the sector and anybody who has studied child development – Liz Truss has a reluctance to accept the wisdom of others, and is pushing forward with a policy which is all about cheap childcare and puts children right at the bottom of the list of priorities.”

“The government is giving children the freedom to have fun in the holidays – it’s a great step forward,” he said.

“Under current requirements, camp providers are expected to follow learning and development rules for younger children. Those rules really aren’t relevant in a holiday setting.

“Now the government has injected a massive dose of common sense into the industry and will trust holiday care providers to ensure children can enjoy their holidays without those restrictions.”

The announcement came as the DfE published its consultation on the regulation of childcare.