You are here:
Home
National

The childcare sector is still crying out for decent pay. 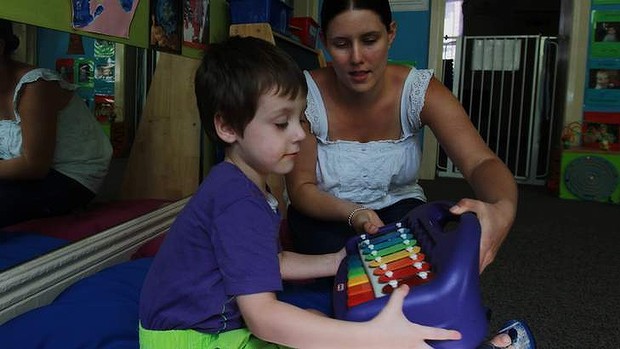 Amy Bell loves her job at an eastern suburbs childcare centre where her days involve teaching, feeding and caring for up to 26 children. But she admits the pay is not one of the best parts of the work.

The 26-year-old is just two weeks off finishing a diploma which will take her wage up from about $19 an hour to $21 an hour. ”It is ridiculously low for the work we do,” she says.

”I love being an educator but the pay makes it very hard. Some weeks I do have to scrounge for money just to buy groceries.” 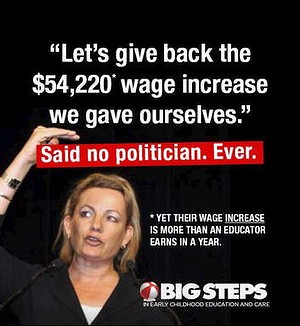 Ms Bell, who has worked at Randwick’s ROCK childcare centre for the past seven years, points out that there is a lot more to looking after children than keeping them clean, fed and entertained.

”A lot of people still have the perception that we’re babysitters and we just sit around and play with the children all day, but we’re not,” she said.

”We follow a set curriculum of teaching. On top of educating the children, we’re responsible for their safety, their physical and emotional wellbeing. Parents trust us to look after their precious children every day.”

The focus of childcare has shifted strongly towards education in recent years, thanks to numerous studies showing the importance of the early years in a child’s learning. The Labor government’s ambitious overhaul of the sector was intended to encourage early learning with better qualified workers and improved staff to child ratios.

But professional staff deserve wages to match and there remains a large question mark over who will pick up that tab following last week’s collapse of a $300 million fund earmarked for pay rises to about 15 per cent of workers over two years.

The move has angered many, particularly those providers who had already signed contracts and promised pay rises of between $3 and $6 an hour to their employees. However others in the sector believed the fund was flawed from the outset as it favoured large providers and only applied to small proportion of workers over two years.

The Abbott government, having reneged on an undertaking to honour all contracts, this week called on providers to ”do the right thing” and give the money back so it could go towards learning and development for all of the sector’s 100,000 workers.

Assistant Minister for Education Sussan Ley has been particularly scathing about the way the fund was set up, calling for the Auditor-General to consider an official auditing.

Michael Crosby, national president of United Voice, the union representing the sector, is furious about the backflip, which he believes reveals an ingrained lack of respect for the industry’s workers.

”This work is undervalued by reason of the gender of the people doing the work,” he said.

”It’s typical of the caring occupations. Traditionally women look after our young people and our old people and our sick people and they don’t get paid properly for it because it is undervalued.”

United Voice is running that argument in the Fair Work Commission, where they are seeking a pay rise of $10 an hour for the workers, many of whom earn less than the cleaners who scrub the floors at the end of the day. ”We run focus groups and when we tell people how much the educators get paid, you can see the shock on their faces,” he said. ”$18.50 an hour? That’s a McDonald’s wage.”

The poor remuneration has often been blamed for high turnover in the industry, with an estimated 180 people leaving the sector each week.

Heather Finlayson, general manager of strategy and development at Australia’s largest provider, Goodstart Early Learning, says that sort of turnover is not sustainable and the not-for-profit group is committed to winning professional wages for its 13,000 staff.

”Children who have access to early learning and care have much higher achievement in reading maths and science in year four than those who don’t,” she said.

”When you start to think about the long-term economic and social future of Australia, you would have to agree that the early years professionals should have professional wages.

”Improved early education is going to assist us in terms of our economic future and social future.”

Cheryl Shigrov, who runs four early learning centres and is a national convener of United Voice’s Big Steps campaign, which is lobbying for improved wages, agreed that many in politics and the broader community underestimated the value of quality children’s services.

”Not only do educators put children on a solid path for the future, they allow parents to go to work or study and make their own contribution to the economy,” she said.

”For every dollar invested in early childhood education, you get much more back in return.”

The Coalition’s backflip on the proposed wage rise has left workers feeling ”totally exploited and undervalued”, she said.

United Voice hopes the Productivity Commission’s inquiry into the sector, due for completion in October next year, will come up with a new funding model which will keep fees affordable while offering fair remuneration for the workers, with Crosby saying the government will have to pick up some of the cost.

”This is a building crisis and it’s only going to get worse until we fix the problem of professional wages and who’s going to pay for it,” he said.

Australian Childcare Alliance president Gwynn Bridge had worked in the sector for more than 25 years and also hopes the Productivity Commission review will go towards resolving the question of quality and wages. ”There is support everywhere for the job the workers do and the effort they put in,” she says. ”They should be rewarded appropriately.”

Government will help Qantas but won’t rescue it, says …

Palmer and Rinehart’s coal mine expansion queried by …

We must fortify fiscal rules

The first 100 days of the Abbott government seen through the lens of Fairfax Canberra photographers Andrew Meares and Alex Ellinghausen.