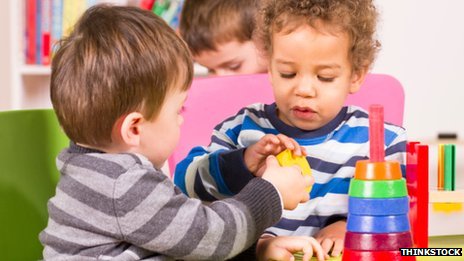 Government spending on childcare has increased in recent years

All political parties are being urged to join forces to review the UK’s childcare system as another report highlights rising childcare costs.

The Family and Childcare Trust’s annual survey says the average cost of a part-time nursery place for a child under two has risen 33% since 2010.

The government said it had increased the amount of free childcare for three and four-year-olds.

The trust’s 14th annual childcare costs survey reveals yet another rise in the cost of childcare for preschool children.

The report, based on 196 UK local authority responses about the cost of 25 hours and 50 hours of childcare in local nurseries or childminders, says: “In the course of this Parliament, nursery costs for under-twos have increased by 32.8%, at a time when real wages have remained largely static.”

It follows a string of surveys highlighting increasingly costly childcare.

Last year, the trust revealed many parents were spending more on childcare than their mortgage.

And many previous surveys have suggested costs can be too high for working to be economically viable for many parents, despite significant efforts by successive governments.

It says: “Over the last five years, while there have been deep cuts to other public services, the coalition government has increased spending on childcare.

“But despite this welcome investment, this year’s survey, the 14th in the series, finds childcare prices have continued to increase and the gaps in provision remain unfilled. The reality is that for too many families it simply does not pay to work.”

It also warns there is a risk that, as fees continue to rise, the new help in the form of tax relief could be wiped out.

“But above-inflation increases in childcare prices have the potential to erode the value of this extra assistance, particularly in London and the South East where parents’ childcare costs may easily reach the £8,000 annual maximum level for help.

Stephen Dunmore, the trust’s chief executive, said: “In the run-up to the general election this May we want to see all political parties commit to an independent review of childcare. Britain needs a simple system that promotes quality, supports parents and delivers for children.”

The report is published as the Liberal Democrats set out their plans for childcare.

And he will restate the long-term ambition of the party to increase free childcare provision to 20 hours a week for all two, three and four-year-olds and for children aged between nine months and two years of working parents.

The findings come after the government scrapped its plan to reduce staff-to-child ratios, which was almost universally rejected as not desirable and unlikely to reduce costs.

A Department for Education spokesman said: “We are pleased the report acknowledges the significant steps we have already taken to increase funding in the early years, and in particular that over the course of this Parliament we have increased funding from £2bn to £3bn a year.

“Providing more financial help for childcare is a central part of our plan for education, and the steps we have taken mean more children than ever before are accessing childcare and early education that will give them a great start in life.”

The National Day Nurseries Association says the biggest reason that nursery fees are rising is that some parents are subsidising the cost of the government’s free nursery places.

It said that the money which childcare providers receive to deliver these free placements falls short by an average of £800 per child per year for each three to four-year-old place and £700 for each two-year-old place.

“Since 2010 the failing Tory plan has seen the costs of childcare soar. On top of this, there are over 40,000 fewer childcare places and wages are down £1,600 a year on average.”