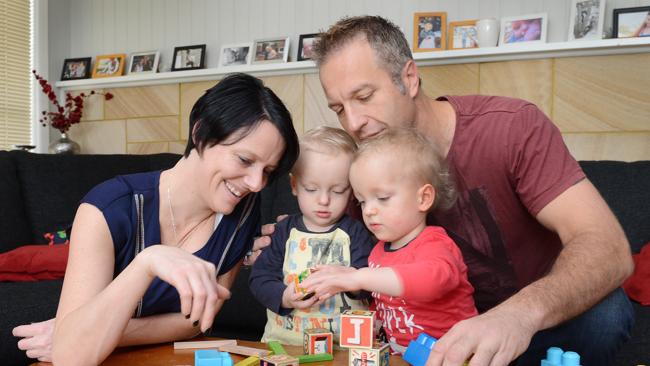 MOTHERS are saying no to full-time work – and even refusing to return to the workforce at all – because of the high cost and confusion of finding childcare.

The revelation from parents and industry groups comes as exclusive analysis by The Sunday Telegraph has revealed the most expensive electorates in Australia for childcare.

“A lot of them are finding that the cost of getting back into workforce and child care fees, especially if they’ve got a couple of children, it’s certainly mounts up.”

New South Wales is paying the fourth highest rates in the nation behind the ACT, Victoria and West Australia, averaging about $81.50 a day.

However, parents in Malcolm Turnbull’s well-to-do electorate of Wentworth, in Sydney’s eastern suburbs, are paying the highest rates in the country, typically shelling out $111 per day for childcare.

That’s around $50 more than in other parts of the state.

About 153,000 NSW children attend long daycare (or centre-based care) and, on average, parents pay just above the national rate for childcare, which is about $80 a day.

At the other end of the scale, NSW is also home to the electorate with the country’s cheapest childcare.

A daily placing at Hume, which takes in Goulburn and Yass north of the ACT, costs about $64.

The analysis tracked full daily rates for long daycare on the Government’s own MyChild website.

Parents pay half that rate, with the other half covered by the Child Care Rebate, which is capped at $7500 a year.

Some families get extra means-tested assistance under the Child Care Benefit, which has strict rules around incomes, the type and amount of care used and why it’s needed.

But demand in cities where people work and live, as well as limited places in new suburbs where young families flock are driving up price.

And childcare staff needed wage rises to keep up with cost of living.

Ms Bridge called for the $7500 cap on the Child Care Rebate be lifted for the first time in years, saying it was stopping mothers returning to work full time.

Mothers were capping their work week at four days so they didn’t sail over that limit, she said.

But if the new prime minister did just one thing in child care, it should be to change the means-tested Child Care Benefit, with bracket creep forcing many families to measly assistance levels, she said.

She said Centrelink processes could make things difficult for returning mothers, but she believed most persevered.

“I think if they are determined they will work through that maze of Centrelink … (but) there’s certainly deterrence there,” she said.

She said some did not understand the assistance available and may mistakenly believe they had to pay the full rate and therefore could not afford to work.

“We are concerned that women are making decisions based on the full cost of childcare without the rebates,” she said.

Ms Page said the Child Care Benefit and Child Care Rebate should be rolled together and an online calculator should be built to help women calculate their out-of-pocket expenses.

“The most important thing is to be able to say when you’re going back to work, well if I work two days or three days what’s the difference going to be for me to be able to make those difficult decisions.

“And you just can’t do that at the moment with the way the payments are structured.”

Australia already has a smaller proportion of working mothers than other OECD countries like Britain, Canada, the US and New Zealand and recent estimates by the Australian Bureau of Statistics predicted the expense of childcare was keeping as many of 70,000 women out of work.

As an election nears the Government remains committed to the $7500 cap on the Child Care Rebate, a trial of extended hours in long day care to help shift workers and recently established a $300 million fund to give some childcare workers a pay rise.

The Coalition wants a Productivity Commission review of the industry looking at cost, availability and flexibility, potentially including Government assistance for parents who use nannies.

The analysis also reveals that of the nine electorates in which the average daily cost of childcare is more than $100, seven of those are held by Liberal MPs.

The Daily Telegraph wants to know how much YOU pay. Tweet #childcare, your suburb and the cost per day you pay for childcare.

Go to dailytelegraph.com.au on your desktop, tablet or phone, punch in your postcode, and see how your electorate compares.

This is just the first of many Voice of Australia stories we’ll be covering in the lead-up to the election.

Also launched is our Voice of Australia Poll Pulse – a real-time way to track how our leaders, their parties, and the independents are performing on social media.

Our Poll Pulse measures the sentiment of posts on social media service Twitter. The live data on our websites right up to polling day will be a must-watch.

There will be other exciting Voice of Australia elements rolled out closer to the election, making your decision on polling day more informed, and more personal to you, than ever before.

Plans to maintain the $7500 cap on the Child Care Rebate

Remove “red tape” introduced under the National Quality Framework, which it believes is too rigid

Have your say in the comments section below.