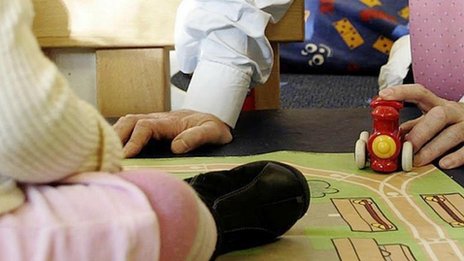 Four out of five parents use some form of childcare

As many as 1.9 million working families could benefit from a tax-free childcare allowance worth up to £2,000 per child from 2015-6, ministers are to announce.

The new scheme, first outlined last year will be brought in sooner; and the maximum parents will be able to claim is to rise by £800.

But Labour said the assistance was a case of “too little, too late”.

The parties are making rival offers to help families deal with the spiralling cost of childcare, which the opposition says has risen by 30% since 2010.

According to the Family and Childcare Trust, the average nursery cost for a child under two rose by 4.2% last year to £106.38 per week for a part-time place (25 hours) while a full-time place costs £11,000 for a year.

At the moment, employees of participating companies can reduce their childcare costs through a tax-free voucher scheme, although only about 5% of UK employers and 450,000 families are signed up to it.

Ministers say twice as many parents will be eligible for support – including the self-employed – under their new initiative, which will come into force after the 2015 general election.

All children deserve the best start in life”

When it was originally announced a year ago, ministers said the maximum support available would be £1,200 per child and that it would be open to families where both parents work and earn less than £150,000 a year.

It also said the scheme would be phased in over seven years, with only children under five eligible for assistance with costs in the first year.

Following a public consultation, ministers have agreed to significantly increase the value of the scheme, up to a maximum of £2,000 per child, and accelerate its implementation, extending it to all children under the age of 12 within the first year. 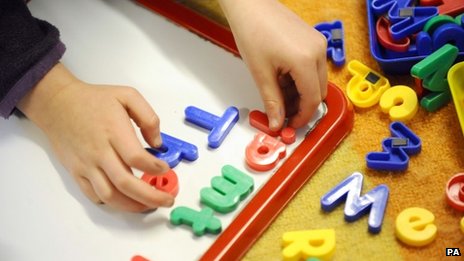 A recent report suggested families in England paid an average of £54 a week for childcare in 2013, up from £47 the year before

In addition, anyone working part-time and earning more than £50 a week, parents on maternity, paternity and adoption leave and those starting their own business but below the earnings threshold will be entitled to support in the first year.

The prime minister will say the scheme is an important component of the government’s long-term plan for the economy, and will “help millions of hard-pressed families with their childcare costs and provide financial security for the future”.

The government is also announcing a £50m cash boost for early years education, aimed at helping three and four year olds from the most disadvantaged backgrounds.

The money will be available to nurseries, schools and other providers of free education in England to improve their overall provision, including recruiting staff and supporting specialist speech and language services.

In addition, the government will also pledge to meet 85% – up from 70% – of the childcare costs of 300,000 families moving onto the universal credit benefit scheme, which will see six in-work and out-of-work benefits consolidated into a single monthly payment by 2017.

Deputy Prime Minister Nick Clegg will claim the package of measures will help ensure “everyone can get on and succeed”.

“All children deserve the best start in life. As together we build a stronger economy for Britain, I am committed to making sure that we create a fairer society too,” he will say.

The Conservatives, Lib Dems and Labour are all seeking to promote family-friendly policies in the run-up to next year’s election.

The government has increased the entitlement for three and four year olds to free early years schooling from 12.5 to 15 hours a week while Labour has said this will go up to 25 hours if it wins power after 2015.

Labour warned that parents are likely to be paying more of their disposable income towards childcare in 2018 than they are now as a result of the government’s policies.

“Of course any childcare support is welcome but this government has done nothing in this Parliament to help parents experiencing a cost-of-living crisis,” said shadow children’s minister Lucy Powell.

“David Cameron has cut support for children and families by £15bn since he came to office, And today he confirms that no help will arrive until after the election. This is too little, too late.”