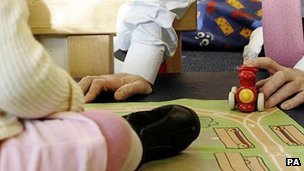 Plans to increase the legal right to childcare provision have been rejected by the Scottish government.

A Labour bid for a legal commitment to give 600 hours of childcare to the most vulnerable two-year-olds was voted down by the SNP.

Scottish ministers said they were committed to improving childcare.

The committee also rejected a Conservative proposal to guarantee all children get two years of nursery before school, regardless of when their birthday was.

However, MSPs did back changes to the proposed Children and Young People Bill to provide more support for care leavers.

Half of children born in 2011 and 2012 will be guaranteed two years of nursery provision, according to research by think tank Reform Scotland.

The organisation said current legal entitlement could vary by up to 317 hours, or £1,033, depending on the child’s date of birth.

Its research, published in November, said a child born between 1 March and 31 August was entitled to two years’ nursery provision before beginning school.


Conservative MSP Liz Smith, said: “The Scottish Government was presented with the opportunity to end the anomaly of birthday discrimination, but instead SNP members voted to uphold the highly discriminatory practice”.

Scottish ministers said they had given councils £249m to deliver 600 hours of childcare to three and four-year-olds, and the most vulnerable two-year-olds, including those from workless households.

A government spokesman, said: “Our current focus is to build additional hours and flexibility into high quality childcare, increasing entitlement to around 16 hours a week. This is a huge step forward in improving our young children’s prospects and supporting parents.

“While some variation will remain, whether a child begins nursery on their birthday, the month after or the following term, the system makes the best use of the entitlement in relation to the child’s age and needs.

“Parents of the youngest children – those born in January or February – will continue to be entitled to a further year’s funded early learning and childcare if they feel it best for their child.”

The Scottish government has pledged, in the event of a “Yes” vote in the 18 September independence referendum, to provide 1,140 annual care hours, for one to four-year-olds, allowing more parents to return to work.

Opposition parties said the policy could be delivered now.

Labour deputy education spokesman Neil Bibby said the SNP had, in the committee, voted against putting their own childcare policies in the legislation.

“The Scottish government have the powers and resources to increase childcare now under devolution if they wish – they don’t need to break up the UK,” he added.