Childcare Is Key for Working Women in Vietnam

HO CHI MINH CITY — While Vietnam still struggles with issues of work and gender, it has been making strides toward equality in its economy. Those attending a recent forum in Ho Chi Minh City said one of the secrets to the success is childcare.


When they go to the office, women here generally leave their children to be looked after by grandparents, live-in nannies, or employees at the country’s increasingly popular daycare centers. These affordable options allow women to maintain both work and family.


“I think conditions for women in Asia are much more favorable,” Belgian Ambassador to Vietnam Bruno Angelet said Thursday.


Speaking at a forum about women in business co-sponsored by his embassy, Angelet said that in Europe, working mothers have a much harder time affording daycare. That’s true for immigrants, as well. Angelet said that in Hanoi he often signs off on visas for Vietnamese who go to Belgium to look after the children of their sisters or their daughters.


But several trends in Vietnamese society could soon make this advantage obsolete. First, couples are increasingly living away from their parents, either because they are more independent or because they move away to find work in the cities. With fewer and fewer three-generation homes in Vietnam, mothers can no longer rely on their own mothers to help raise their children.


Also, nannies and childcare facilities are cheap for now because Vietnam is still a low middle-income country. But as Vietnamese get richer, fewer may be willing to work as caretakers and these costs will rise. 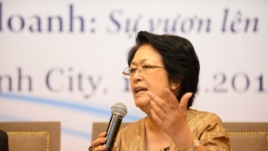 Ton Nu Thi Ninh is among Vietnam’s most prominent advocates of gender equality, having served as a diplomat and parliamentarian. 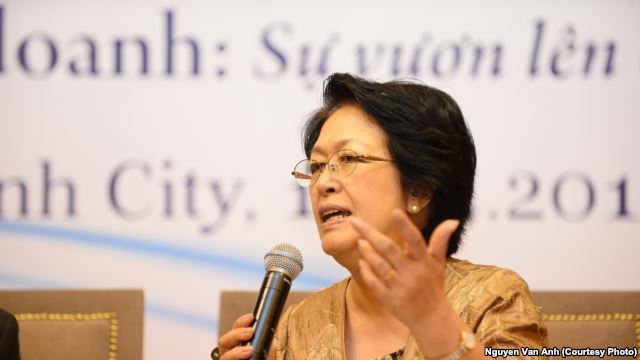 Ton Nu Thi Ninh is among Vietnam’s most prominent advocates of gender equality, having served as a diplomat and parliamentarian.


Ton Nu Thi Ninh, who organized the forum, responded by saying that as Vietnam evolves, it does not necessarily have to lose all of its traditional values.


“Culture matters,” said Ninh, a former diplomat and member of parliament who has become a leading advocate for women’s rights. “We should find our core strength and select what values to bring with us into the future,” she said.


Some of that strength is reflected in the data. According to the World Bank, Vietnam had a female labor force participation rate of 73 percent in 2012, compared with 57 percent in the United States and 64 percent in China.


But not all is positive for Vietnamese working mothers. Even with better childcare options, many who climb the corporate ladder find many of the same challenges as their counterparts in the West.


“I have traded off my youth, my personal time for my business,” said Huynh Kim Phung, director of media and PR firm Truong Phat. “To be good and successful businesswomen, we have to spend a lot of time outside the family, and sometimes the trade-off is really hard.”


Eventually Phung convinced her husband to share some of the domestic duties, which forum-goers said is one area where Vietnam can make progress on gender equality. Men will have to do more chores and care for children to help their wives, especially if costly daycare becomes out of reach for average Vietnamese.


Attendees also discussed structural changes that Vietnam can make, from companies that institute quotas and internships to bring in more females, to public policies that support childcare and equal pay.


In 2012, Vietnam was one of the few countries where the pay gap increased between men and women, to as much as 30 percent, the International Labor Organization reported.


Nguyen Hong Ha, deputy general director at the Vietnam Chamber of Commerce and Industry, said the country needs a cultural shift to solve the problem.


“When children are born, they have no idea whether they must respect women or men,” she said. “Instead, gender equality is learned, so Vietnamese have to teach not only males to do their share, but also females to believe they can do just as well as men,” Ha said