Childcare is 'luxury for well-off' 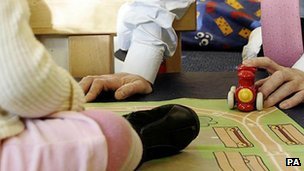 A survey of parents in Scotland suggests that childcare is a luxury that only well-off families can comfortably afford.

The poll by Save the Children found that less well-paid parents were often no better off going to work than if they stayed at home.

The charity suggested work was an unrealistic option for poorer parents.

It listed 10 key issues it wants addressed in the Children and Young People Bill, going through Holyrood.

They include a focus on development, addressing the high cost and variable availability of childcare and helping parents back to work or education.

The list also includes help with the work and childcare balance and more flexible childcare and employment.

Save the Children’s report, which surveyed 150 people, said: “The prohibitive cost of childcare is the key issue. Parents are finding that childcare is so expensive it’s becoming a luxury that only families earning a very good wage can comfortably afford.

“For families on low incomes they simply don’t earn enough to cover their childcare bill as well as living costs, making work an unrealistic option.”

Save the Children wants the Scottish government to use the bill to give families a right to high-quality, affordable and flexible childcare.

Claire Telfer, the charity’s head of policy and campaigns in Scotland, said: “Parents tell us that they are still struggling to access affordable, accessible and flexible childcare and this is holding them and their families back.

“One of the most striking findings was the level of consensus that emerged on what parents want and what needs to urgently change, no matter where parents live and what age their child is.”

Children’s Minister Aileen Campbell said: “This report gives an insight into the challenges faced by parents in accessing suitable childcare.

“It shows why we are right to give children more free and flexible nursery hours, by 2014, to help get children’s learning off to the best start and help parents back into a job or training.”