Childcare is no child's play

Parents are struggling to get the childcare they need in what is an expensive and often inaccessible system, writes Stephanie Peatling. 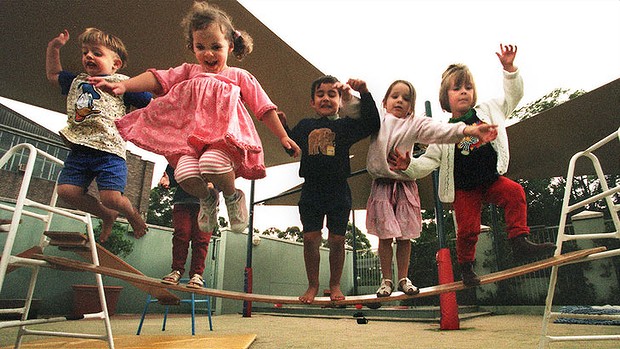 Neither the lack of childcare nor the tearful breakdown in a centre is an unusual story for parents of young children living in Melbourne or Sydney. Photo: Phil Carrick

Georgia Marshall’s return to work was not supposed to include tears in public and the fear that her husband might have to quit his job so that she could go back to hers.

Marshall, a lawyer, thought she was on top of the childcare question when she put her unborn child’s name down on four waiting lists when she was three months pregnant.

It cost $10 to get on the A list: not a huge amount but enough for her to expect some kind of update about when a place would become available.

”No one got back to me and then all of a sudden I was hearing it was going to be two or three years [before a place was free], which was unacceptable,” Marshall says.

”I felt I would lose my job or the status I had built up if I didn’t go back. I turned up at the centre every day and then I lost it and I burst into tears.”

This happened on a Friday and she was due back at work on the Monday. The centre’s director took pity on her and found two days a week of care for Marshall’s daughter. But that still left another two days a week of care that Marshall needed. Her employer then allowed her to spread the necessary work over three days from home. It was not ideal, but it was better than nothing.

Two years later, Marshall wants to work full-time but can’t because the centre doesn’t have any available days.

She is more than happy with the centre and appreciates that its resources are stretched but has just about had enough: ”It’s a wonderful centre and I don’t want to shift her [my daughter] but I have started to look elsewhere because I would like to go back to work full-time and they can’t fulfil my needs.”

Neither the lack of childcare nor the tearful breakdown in a centre is an unusual story for parents of young children living in Melbourne or Sydney.

Inner-city areas that were once the domain of the childless have seen mini population booms that have resulted in childcare centres with waiting lists hundreds of names long and parents who want to return to work having to hire nannies or rely on family.

In the first quarter of this year alone an extra 20,000 children poured into a system that is struggling to keep pace not only with the numbers but the additional requirements the government has put in place to improve staff qualifications and shift the emphasis from childcare to early childhood education.

Indeed, the number of children attending some kind of childcare hit 1 million for the first time earlier this year, according to government figures.

The demand for childcare is the result of a fundamental shift in the working patterns of parents.

According to the 2011 census, 45 per cent of the women now in the workforce who have young children returned to work before their youngest child turned one.

”We do not have an adequately flexible system,” says Dr Elizabeth Hill, the co-convener of the Work and Family Policy Roundtable.

”We have to have a very thorough rethink of the arrangements because it’s so ad hoc. How do you pay for a high quality, flexible, affordable system? No one has ever said that can be done cheaply … A good system will have to have variety, but at the moment we know the system is struggling and families are struggling.”

Hill praises Labor’s changes to the childcare system when it comes to improving the quality of services, but she is critical of its decision to increase the rebate paid to families to help them with out-of-pocket costs.

Boosting the payment from 30 per cent to 50 per cent of parents’ out-of-pocket costs was an electorally popular decision. But childcare operators warned that paying the rebate directly to parents rather than centres would have an inflationary effect and Hill, a political economist at the University of Sydney, says this is exactly what has happened.

It is not unusual to find centres charging more than $130 a day in areas where demand is most acute. Hill says price rises have led to a debate about childcare that focuses too much on affordability. ”Quality, affordability and accessibility need to be kept together. Affordability can’t be the priority that means you trade off against quality.” The only fair solution would be to have a public childcare system in the same way there is a public education system, but that would be ”revolutionary policymaking”, she says.

No political party has gone anywhere near such an idea, which would come with a hefty price tag.

Apart from raising the rebate, Labor has required centres to hire more qualified staff and increase overall staff numbers. It has set aside a small amount of money – $300 million – to top up wages but the sector now wants wholesale wage reform so that childcare educators would no longer be earning, on average, about $19 an hour.

The Coalition has promised a Productivity Commission inquiry into the childcare sector. It would examine the controversial question of whether families should be able to receive the taxpayer-funded rebate for nannies.

Meanwhile, the industry is concerned a Coalition government would wind back Labor’s attempts to improve the educational quality of childcare for the sake of lowering costs.

”It’s at a tipping point where people say it’s not worth going back to work. The value of high-quality early learning has got enormous potential for long-term productivity and I don’t think that’s been grasped by many politicians. Children’s capacity for learning and development is huge. We must get better access for children in low-income areas.”

Hall’s argument is two-pronged: the quality of the system must be maintained to give all children a fighting chance of doing well at school, but its cost must be monitored to ensure parents earning low incomes do not decide to give up work because childcare is too expensive.

”Australia is one of the lowest investors in the world in early childhood education and the evidence for kids from more difficult backgrounds shows that pulling back [from higher-quality service] would be unwise,” he says.

Where Elizabeth Hill and Toby Hall agree is that childcare is the key to ensuring women’s long-term participation in the workforce.

A key policy difference between Labor and the Coalition is paid parental leave. Labor came into office in 2007 and introduced a near universal scheme whereby the primary carer of a new baby now receives the minimum wage for 18 weeks.

It was designed to give women on low and middle incomes and without access to employer-provided parental leave some breathing space after the birth of a child.

But it has been gazumped by the Coalition’s controversial scheme – backed by the Greens – which argues parental leave is a workplace entitlement like holidays or sick leave so it should be paid at a parent’s replacement salary.

The scheme would be paid to people earning up to $150,000 a year, which effectively means no one would be paid more than $75,000 because people would only be paid for six months.

The Greens want the scheme capped at an annual salary of $100,000. Hill says the Coalition’s scheme is more in keeping with international research that shows women need much more than 18 weeks (ideally a year) to care for themselves and a new baby.

In other countries, that parental leave should be paid at someone’s replacement salary is not a controversial proposition. It is considered only fair.

However, she says, voters would be wise to consider when the Coalition’s scheme would be introduced should it win government.

”A generous paid parental leave scheme is great, but in tight budget times you have to think about whether [that can be balanced against] things like properly paying childcare workers and having quality care,” Hill says.

”We have a great first step in terms of the current paid parental leave scheme. It looks after the women who need it most. The Coalition and Greens’ system isn’t up and running. We know there are concerns from business and within the Coalition about it. What will happen with it? When would it go through? Would it go through?”

But the harder policy questions come when parents go back to work.

”The policy objectives of paid parental leave aren’t going to be achieved unless you have these other ones which are high-quality, accessible, affordable childcare and decent workplace conditions,” Hill says.

Hill says the time a parent spends caring for a newborn baby is short, whereas mothers and fathers will spend years trying to balance work and family responsibilities.

Georgia Marshall knows this only too well. She had six months at home with her daughter, followed by another two years of work and still not enough childcare to allow her to work as much as she would like. ”I want to go back full time, but I can’t. No matter how understanding they are [at work] I’m a resource that could be more useful.”

Prime Minister announces extended out-of-school care for up to 345,000 children.

Kevin Rudd has made a major pitch for the votes of battling families in the outer suburbs, announcing extended out-of-school-hours care for up to 345,000 children.