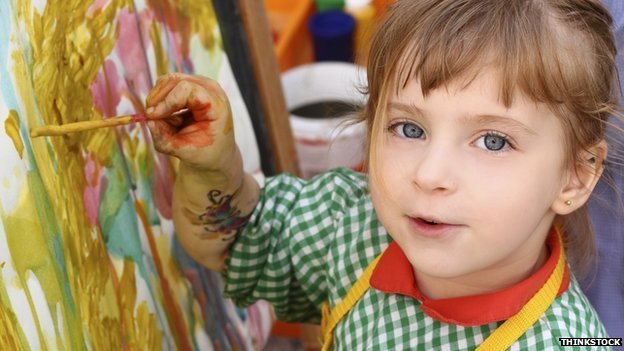 The government says the childcare sector is ‘thriving’

A long-term fall in childcare places available in England appears to have reversed in the five months to August 2014, figures from Ofsted show.

But there are still almost 8,000 fewer places than in Autumn 2013, largely lost from childminders.

The government says the new figures suggest the sector is now “thriving”.

But the Pre-School Learning Alliance said that the recent upturn in places came “nowhere near” to off-setting the previous fall.

The latest Ofsted figures show there were 1,292,554 childcare places available in England at the end of August this year, run by 76,131 providers.

That amounts to 1,428 more childcare places available in August than in March, despite a fall in the number of providers.

“These statistics highlight that the sector is thriving,” said Childcare and Education Minister Sam Gyimah.

“The early years count which is why ensuring parents have access to high quality childcare is part of our plan for education.”

However the Pre-School Learning Alliance points out that Ofsted’s figures show that overall childcare places fell steeply between September 2013 and this August.

Neil Leitch, chief executive of the Pre-School Learning Alliance, said he was particularly concerned about the continuing fall in the number of childminders who are often more flexible than nurseries and provide the after-school pick-ups crucial to many working parents.

“Childminders play a crucial role in the provision of high-quality, flexible early education and care in this country, and yet all too often they are unfairly overlooked and dismissed by both government and Ofsted.”

Mr Leitch said childminders were leaving the sector because of the decline in support from local authorities and the “ongoing” lack of adequate funding for children entitled to free childcare.

Earlier this week, the Alliance claimed funding for the government’s free childcare scheme was falling short.

“It’s vital that the government recognises the value of the services that childminders provide to children and families and ensures that they are adequately supported – both financially and practically – to continue providing them,” said Mr Leitch.

The government said the new figures suggested 43% of the new places are in areas of deprivation.

Mr Gyimah added: “We know that the cost of childcare can be a real burden for parents which is why we have extended the 15 free hours for childcare a week to more two-year-olds from this September and from next year, we’ll be introducing tax free childcare, providing 1.9m families with up to £2,000 of support per child.”