Childcare subsidies dry up amid shutdown

Poor children who qualify get vouchers to pay for a year of childcare, but most of the funding for those vouchers – $203.9 million of $330.9 million this year – comes from the federal government.

The federal government shutdown means that money isn’t there, and county leaders are facing tough decisions about whether they can afford to help the children who need it.

“When 2,000 kids don’t have childcare, it means parents may not be able to go to work, or they have to flip to a Plan B that may be not necessarily so stable,” Durham County DSS Director Michael Becketts said.

The move comes one day after the state Department of Health and Human Services sent counties new annual child-care budgets – without federal money.

Durham lost 60 percent of its budget, and Becketts said the county can’t afford to pick up the tab.

Wake and Cumberland counties took even bigger hits, with each losing two-thirds of its childcare budget. 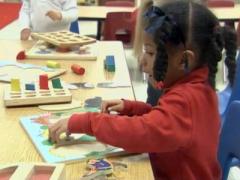 Wake County officials said it is working with the Smart Start program to bridge a $527,000 gap so that childcare subsidies can continue through the end of the month. Cumberland County officials said they haven’t yet decided what to do, and county commissioners will discuss the matter next week.

With no guarantee the federal money’s coming back at its current level, Becketts said Durham County’s program has to stop spending, and his hope is that local employers and providers can be flexible.

“There’s no magic box full of money waiting for someone to just open it or a faucet to turn on,” he said.

Durham is one of 36 counties that have told DHHS they’re stopping their childcare subsidies during the shutdown. Seven have already stopped paying.

Becketts said some providers who serve low-income communities may have to lay off staff or close their doors.

“The cuts that are happening are happening to the people who are the least able to have financial alternatives,” he said. “So, I don’t know what the answer is. I just hope that one morning we’ll wake up and the federal government will be open.”