Childcare use hits the million mark 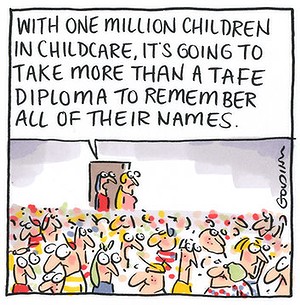 The number of children in childcare has increased by one-third over the past eight years with the biggest boom in the long-day care sector even though families in Sydney and Melbourne are still struggling to find vacancies.

While providers have raised concerns about fee increases under changes to childcare, which require more and better qualified staff, the Department of Education, Employment and Workplace Relations report shows a rise of 7.3 per cent last year, in line with the average annual increase of 6.9 per cent since 2004.

Out-of-pocket costs for families using long-day care were highest in the ACT and NSW and lowest in Queensland.

However, Australian Childcare Alliance president Gwynn Bridge said they did not reflect the experience of providers, saying changes under the national quality framework for early childhood education and care have had an impact.

”Fees have certainly increased since the national quality framework was introduced and parents are still finding it tough,” she said.

While the report found there are more than 15,000 services in Australia, Ms Ellis acknowledged that some families still struggled to find places for their children.

”While there’s been strong growth in the number of places, there are still unacceptable shortages in many highly populated centres, particularly Sydney and Melbourne,” she said.

“Our government is tackling these shortages on a number of fronts but it will take partnerships between all levels of government and the private sector.”

The report follows new data from childcare watchdog, the Australian Children’s Education & Care Quality Authority, which found that 44 per cent of providers were still failing to meet the new standards of care and 5 per cent were given waivers to keep operating despite not meeting staff or space requirements.

From January 1, 2014, every childcare worker in Australia must have a certificate III qualification, half the staff must have at least a TAFE childcare diploma and every centre must have a degree-qualified teacher on site all day.