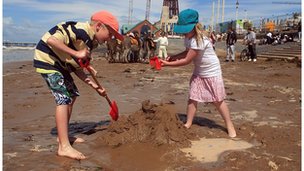 The long summer holiday – a chance for family bonding or a childcare headache?

The government wants to let all state schools in England decide their own terms and holidays from September 2015.

Under the plan, local councils would no longer be able to set school terms.

Some 77% of 1,190 parents questioned by parenting website Netmums feared planning childcare and activities would be harder if school holidays varied.

The poll was carried out last month for the charity 4Children.

The changes in the government’s Deregulation Bill will pave the way for individual schools to change the timing and duration of terms and holidays, perhaps even to reduce the total amount of school holiday from the current 13 weeks a year.

Academies and free-schools already have this power. The bill would extend it to all state schools.

For example instead of the usual two weeks off at Christmas and Easter, a six-week summer holiday and three half-term breaks of a week each, some schools might divide the school year into six short terms, separated by two week holidays.

This would mean scrapping half-term breaks and shortening the summer holiday to four weeks.

Many parents fear schools may change their holidays so they no longer coincide with neighbouring schools, according to the survey.

Parenting author and mother of four, Sarah Ockwell-Smith said: “It is already difficult for parents to work and entertain their children during the holidays but with the changes to school holidays coming into place, it will prove impossible.

“Schools need to communicate with one another and ensure they take the views of parents on board too”.

Ms Ockwell-Smith said she liked the long summer break as it allowed children a balance between school and home.

Cathy Ranson, of Netmums, described the plan as “family unfriendly”, adding that it risked “chaos”.

Anne Longfield, chief executive of 4Children, said things could get “unbearably complicated if different schools were to take different approaches”.

Ms Longfield said that to help parents with the childcare challenge of the six-week summer break, schools should open their doors to local childcare providers.

Asked if their children’s school was going to change their school holidays, what changes they would prefer, 33.8% of parents wanted to spread holidays more evenly throughout the year and 11.3% wanted shorter school holidays.

Just over 13% wanted a longer Christmas break and a shorter summer holiday, while 3% would prefer a longer Easter break.

Some 38.2% said they thought the current arrangement was fine.

A spokeswoman for the Department for Education said: “It is fantastic to see in this survey that more than 60% of parents want schools to use their new freedoms to change term dates.

“Head teachers know their pupils and parents best and we trust them to respond to parents’ views.”