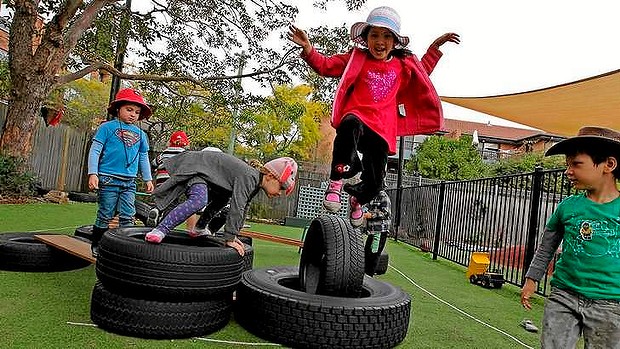 Top of the class: Children enjoy playing at the upmarket Only About Children childcare centre at Neutral Bay. Photo: Ben Rushton

One-third of Sydney childcare centres have no vacancies, forcing some parents to wait nearly two years for a place, with neither Labor nor the Coalition outlining a solution to the childcare crisis experts say is hampering women’s workforce participation.

Of the 743 childcare centres in Sydney, 220 have no vacancies, according to a Fairfax Media analysis of data from the federal government’s MyChild website.

Availability is worst in suburbs such as Paddington, Kingsford and Kogarah. One-quarter of all NSW centres are full.

Sydney parents are paying an average of $95 a day for childcare, according to MyChild. Prices top $164 on the lower north shore, but some parents in Ultimo pay just $53 a day thanks to TAFE subsidies for students.

The Australian Chamber of Commerce and Industry chief Peter Anderson said childcare had “become much less visible in the political debate” this election campaign because of all the focus on Tony Abbott’s $5.5 billion paid parental leave scheme.

“One driver of increasing productivity is ensuring we have a better balance between paid parental leave provisions and childcare,” Mr Anderson said. “Childcare is of equal, if not greater, significance than paid parental leave [in terms of] the feasibility of returning to work after having children.”

Labor’s first big campaign announcement was $450 million for outside school hours care, but it has not promised any new funding for childcare to date. The Coalition has said it will hold a Productivity Commission inquiry into childcare if elected, to work out how to better meet the needs of families.

UNSW social policy researcher Lyn Craig said fixing childcare would require a major government investment on a par with funding of the school system. “If all the resources go on the early months [with paid parental leave] but it’s impossible to get childcare after that, then you haven’t solved the social problem of workforce participation,” she said.

Twenty per cent of the 717 NSW parents surveyed by careforkids.com said they had to wait more than a year for a childcare spot, with some reporting being on wait lists for 21 months in a separate study.

The Fairfax analysis found location is a bigger influence than cost on childcare vacancy rates.

The premium Only About Children chain which charges $164 a day for children under two at its Neutral Bay centre has no vacancies at any of its 19 Sydney campuses. Parents can wait up to 18 months for a spot.

“We’re not shy about offering a premium service,” Only About Children’s director of children’s services, Rebecca Watson, said.

“There is a growing group of families who want to choose something above and beyond generic day care and have the ability to do that.”

Children attending an Only About Children service receive sight, hearing and speech assessments, learn foreign languages, and eat food from a nutritionist-devised menu.

Meanwhile, one of Sydney’s cheapest centres, Northmead Kindergarten, which charges $55 a day, isn’t full. The manager said none of the eight centres within two kilometres of her centre was full either.

Associate Professor Craig called on political leaders to follow the lead of Scandinavian countries which provide a year’s paid parental leave and then a childcare place for every one-year-old, which is heavily subsidised by the government.

Discussing someone’s cancer is a difficult task and radiation therapists do it daily. Actors from the Cancer Council help students at RMIT practice how to best handle these cases.