The number of two-year-olds receiving free childcare will double as a government scheme is extended to working families on low incomes.

From today, 130,000 youngsters – 20 per cent of two-year-olds – will be eligible for funding because their families qualify for Free School Meals or they are looked after by their local authority.

Deputy Prime Minister Nick Clegg has revealed that next September, the number will rise to 260,000, or 40 per cent of the cohort. 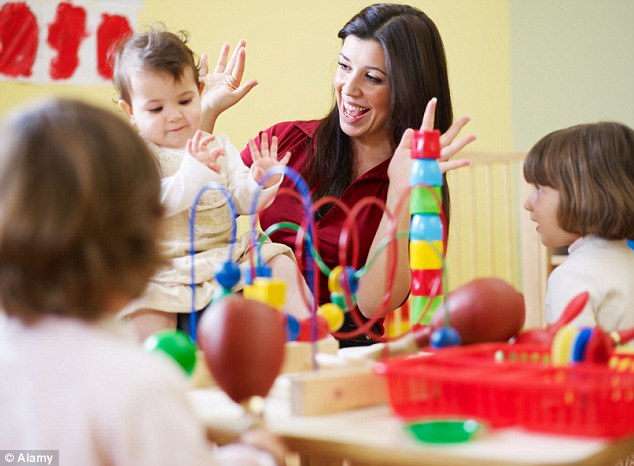 The scheme is being opened up to families that earn less than £16,910 a year and receive working tax credits.

Children who have been adopted, are in care or have a disability or special educational needs will also benefit from next year.

Parents who qualify will be able to claim up to 15 hours a week of free early education for their child.

Mr Clegg will outline the overhaul in a speech today, stressing that the government is helping more children achieve a ‘brighter start in life’

He said: ‘All the evidence shows that if you take two children – two five-year-olds hanging up their coats next to each other on the first day of school – the poorer child will already be behind their better off classmate before a single lesson has been taught. 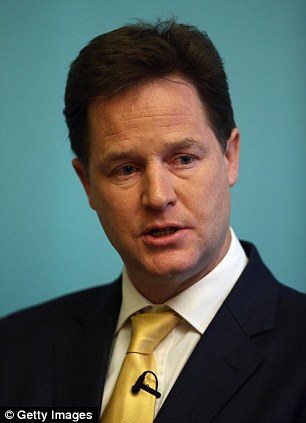 Deputy Prime Minister Nick Clegg has revealed that next September, the number will rise to 260,000

‘Without this help, children suffer and the whole class suffers as teachers have to focus more of their efforts on children who are frustrated and left behind through no fault of their own.

‘I believe that every British family, whatever its structure, background and circumstances, should be able to get on in life.’ The free childcare entitlement for two-year-olds was announced in the 2010 spending review.

Speaking at the time, Mr Clegg said that parents would be given the option to spread their free nursery place over two days, rather than three, and to use the free hours between 7am and 7pm rather than 8am to 6pm.

This was intended to make it easier to fit the childcare around working lives.

The Pre-school Learning Alliance yesterday welcomed the expansion but warned that the scheme would not achieve its goal of giving two-year-olds a good start in life without proper funding.

Neil Leitch, chief executive of the alliance, said: ‘From taking part in the pilot scheme for two-year-olds, we are acutely aware that many of these young children from struggling families will have additional needs requiring specialist one-to-one help.

‘Indeed, from our experience, we estimate that the true cost of providing such care could be double the amount per place the government has allocated.’

He said that the early years sector ‘fully supported’ the government plans but was wary of getting involved because many child carers have provided free places at a loss under a similar scheme for three and four-year-olds.

He added: ‘The free early years entitlement scheme for three and four-year-olds has been historically underfunded by successive governments.

‘We cannot afford such underfunding to continue indefinitely and trust that now the government is extending the scheme to this younger age group that the higher costs of providing care to these children will be recognised and fully met.’

Anand Shukla, chief executive of the Family and Childcare Trust, warned that nursery closures could impede the delivery of free childcare.

He said: ‘We are concerned that loss of nursery provision in children’s centres is impacting on local authorities’ ability to find sufficient places for the offer.’

Mr Shukla added: ‘Cost savings have driven nursery closures and this approach reduces capacity in the system which will damage government hopes of meeting its targets for provision of childcare for two-year-olds.’

“Free school meals” and “Two year olds” should never be in the same sentence, paragraph, nor essay!! SHAME on any so called parent who dumps their child into any school or nursery for long hours well before they should be in compulsory education!!! DO NOT call yourself a Mother.

My husband works full time on a mid to low wage, I am a full time mum. We own our own house and only receive child benefit and small amount of tax credits. I am 39 and previous to having my children worked full time from the age of 21 in retail management, my husband has worked all his life. 6 months ago I was told about the 2 yr old funding and told to apply as I may get it and I have. I am not a scrounger neither is my husband. My children are English, able bodied and intelligent. This story is as always sensationalist and the comments from people bemoaning this free child care are from people who don’t know the real story. I can now go back to work 2 days a week and again give back what we are taking. Don’t judge until you know all the facts.

I can’t afford to have another child of my own because I’m paying for other people’s!

I only had a child when I knew I could afford to send her to nursery as I wanted to go back to my job. I paid for her Childcare as I would expect any patent to want to do. Not to scrounge for free places off the taxpayers.

And the idiots like me who spent years in the education system for a good wage and who work long hours will continue to pay for nursery and dinners while footing the bill for the rest.

Childcare in my area costs around £900. Giving people free childcare it’s like topping up their income by with an extra £13,000 wage. Tax credits, working credits & free childcare are supposed to help the poor but with all the extras they aren’t the poor ones. Why not just create a world where people earn what they work for instead of creating artificial incomes. Why should someone working 16 hours be topped up so they earn the same as a full time worker? Not paying tax as they earn so little or their benefits cost more than they contribute. Also my cousin was entitled to free childcare. Neither her or her husband worked & a place in a private nursery was fully funded or the girl in my work who works 16 hours per week, her partner is on benefits not working & they have funded childcare??Why on earth does the government give free childcare to state funded stay at home parents??

What so many people on here fail to appreciate is that not all people one low incomes who will benefit from this scheme are sitting at home doing nothing. My daughter will be able to attend nursery and interact with other children whereas without this help she would have only me for company most days. I am a single mum but I’m also a graduate who has had to struggle financially while my ex continues with his life with only minimal affect on his bank balance. I will be able to gain two days school experience a week which is vital if I am to gain a place on a teacher training course and better my life and that of my daughter. The reality is as a single parent of a child under 5 it is impossible to work full time, keep a roof over your head and afford childcare costs and everything else that comes with life. I agree that not everyone will see it as an opportunity to get back into work and I too share many people’s view that working parents should be helped.

This is infuriating !!! For the families that both parents work they have to pay for child care, yet those who don’t work get to be even lazier and get to send their children to nursery at an even earlier age ? Where is the rewards for full time working parents ??? Another reason why I would like to leave this biased country !!!

It is a con, they only take the two year olds if you have a child with a CAF, if a child is subject to a child protection plan a child with a disability, a child with medical needs or who is involved with social care . A child with special educational needs and the one that really gets me is a child who does not speak English. So lets be honest and get the story right.

And for the record I know of MANY white Brits who’s own children simply grunt because their parents haven’t taught them to speak. That’s where you get the masses being sent to speech therapy.
So let’s be honest and get the sorry right.

Diya (Brit Born Sikh) 32, Wife/Mum and all round Superwoman
,

It’s my children I fear for. We, their parents are being bled dry at every turn because we work and we don’t sit on our backsides all day. Our parents ensured we studied hard for DECENT careers which would yield good incomes which we now have. WE got to where we are in life off our own achievements and we were not handed anything for free by the government. We even waited 7 years into our married life before we had our 1st daughter because we wanted to focus on creating a stable and secure environment with total financial independence as any child we have was going to be OUR responsibility.

Our children will be taught the same as we were. They will have decent educations with actual careers at the end. They like us will pay phenomenal amounts into the system and wipe the noses of the lazy and belligerent.

The scary part, can you imagine how much tax they’ll have to pay 15 odd years from now if things carry on as they are? I dread to think.

Diya (Brit Born Sikh) 32, Wife/Mum and all round Superwoman
,