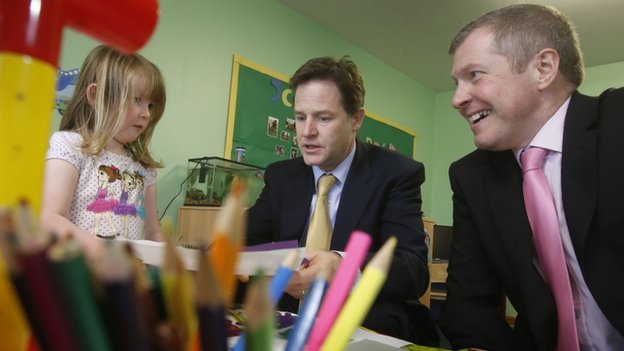 He will say measures in the UK budget mean the Scottish government could go further on provision for two-year-olds.

Meanwhile, Scottish Secretary Alistair Carmichael will say the independence referendum will “clear the air” and lead to more devolved powers.

Scottish ministers have previously said that an annual 600 hours of free childcare provision would be offered to every two-year-old from a workless household, about 15% of the total, by August this year.

By August 2015 the provision could extend to 27% of all two-year-olds, as entitlement is widened to families receiving certain welfare benefits.

However, Scottish government ministers said a long-term commitment to raise that figure to 50% could only be funded in an independent Scotland.

Mr Rennie said Scottish ministers must go further than their current plans and match the 40% pledged by the Tory/Lib Dem Coalition government for England.

The Scottish Lib Dem leader will say: “Thanks to the UK budget and the improving economic conditions, the Scottish government now has the money they need to implement the childcare package in full.

“I want (Scottish Finance Secretary) John Swinney to use the extra money he has received in that budget to fully match the excellent work south of the border on early education and childcare.”

Mr Rennie will tell the Aberdeen conference: “He’s just over half way there already. Now he’s got all the money necessary he can travel the whole way.

“No fuss, no groaning, just do it. Future generations will thank us for this.”

Meanwhile, the Scottish secretary will say a referendum “No” vote on 18 September could be “cathartic” for Scotland.

He will say: “A positive vote to stick with the UK family will not only provide certainty and stability for Scotland, it will unplug the constitutional blockage and open the way to real progress for people.”

Mr Carmichael will also say the Scottish Parliament needs to give more power to councils.