The trials and tribulations of combining work and family life are well-documented. But an unlikely duo has found the answer – and they’re making an impressive profit along the way.

Since 2000 Ben and Oliver Black have shaken up the childcare industry. Back then they were young, free and single, and, perhaps surprisingly, childless.

Oliver Black was working at Procter & Gamble in the late 1990s when he saw first-hand how his colleagues with children struggled to find suitable childcare.

He gave up his job, persuaded his brother Ben to join him, and the pair bought Tinies Childcare, a bankrupt chain of seven nurseries. Tinies had been around since 1975 when it was launched as a nanny agency with five branches around the country. The brothers were joined in their new venture by old friend Amanda Coxen.

“It was tough to start with,” Ben recalled. “We thought we could revolutionise nanny agencies but parents are hard to deal with – they have high expectations and low cash flow.”

[What every dad needs to know before parenthood]

The trio’s luck changed when the BBC filmed them for its Trouble at the Top documentary series.
“We got a lot of publicity and new franchisees out of that and a mentor to look at the numbers,” said Ben, “We started to do recruitment for nurseries and nannies and the agency model started working.” 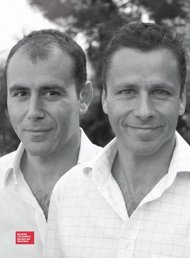 Ben and Oliver Black’s childcare businesses turnover £6m a year By 2005 Tinies had more than 30 branches and had become the biggest nanny agency in the UK, the biggest supplier of staff to nurseries, and a leading provider of creches.

“The next breakthrough was when private members club the Hurlingham Club approached us,” said Ben, “It had a private crèche for its members but had problems running it so they asked us to run it for them and we started running managed nursery and crèche businesses for organisations. We built this into a £5m managed nursery business  –  it was an exciting time.”

It was then the brothers decided to move into emergency childcare. They built a website, www.emergencychildcare.co.uk, which allows parents to book whatever childcare they want –  nannies, nurseries or childminders – when they want it and allows employers to subsidise bookings.

“We took the site round companies and the first on board was the Metropolitan Police,” explained Ben, “It was just after the London terrorist attacks and police officers were all on call. For police married to other police officers, being called into work at short notice created childcare issues.”

Another big client was IBM which paid for childcare services for its staff out of its Global Work/Life Fund. It was keen to offer flexible working, have a diverse workforce including more women, and promote female leadership. A subsidised crèche for employees’ children was the perfect way to meet these goals.

[Getting active as a family – our favourite activities]

The Emergency Childcare site now has more than 20,000 parents registered and booked 18,295 hours of childcare in August alone. The company won the Daily Telegraph’s Trailblazers Award in 2007.

Next, in 200,6 Ben and Oliver founded My Family Care. The idea was to offer clients a complete family friendly employee benefits package including emergency care for elders.

My Family Care is now the parent company of all the group’s businesses and has the tagline “Making work + family work” which sums up its aim of supporting working parents and carers. It is forecast to turnover £6m this year.

Typically, My Family Care’s services are offered to employees as a benefit. Santander, for example, uses My Family Care to offer workers emergency childcare, school holiday cover and backup adult and eldercare. The partnership means staff are less likely to take unscheduled leave in an emergency and it helps the bank attract and retain a loyal workforce.

[Natural dad: how my partner bonded with our babies]

In total more than 350,000 employees in the UK have access to My Family Care’s services.

Nursery chain Tinies, meanwhile, is still going strong and has been involved in the Government’s Sure Start contracts since 2007. Sure Start was set up to give more deprived children a better chance in life and its centres offer parents and carers advice on health, parenting, money, training and employment.

Tinies also manages the holiday play-schemes for more than 32 government departments as well as crèches and kids club programmes for fitness chains.

More recent initiatives by My Family Care include Nanny Share and the Good Care Guide. The latter, run together with United for all Ages, is a Trip Adviser-style website which allows people to rate providers for quality of care, facilities and value for money.

“We’re at the stage now where we’re concentrating on an aggressive sales strategy,” said Ben. “We’ve got about 100 corporate clients, or all sizes, and want to grow that. We’ve learnt from our mistakes and our jobs are good fun and flexible.”

Flexibility is important for the brothers as they each have three children of their own now – and they can be sure emergency childcare is on hand whenever they need it.

[Loose change: the best way to teach children about money]