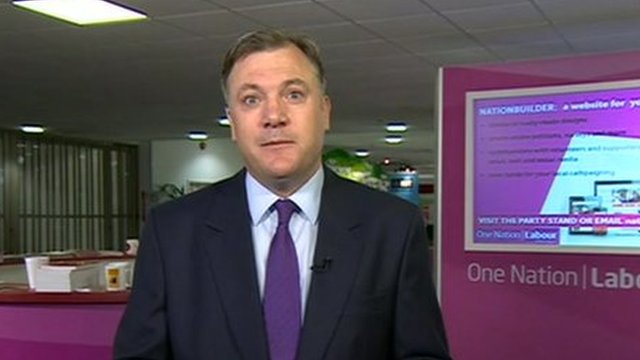 Ed Balls: “We will increase for working families free childcare for three and four-year-olds”

Working parents of three and four-year-olds in England would get 25 hours of free childcare a week if Labour wins the next general election.

Shadow chancellor Ed Balls plans to raise the banking levy by £800m a year to fund the move.

Three and four-year-olds currently receive 15 hours of free care a week, but Mr Balls wants to increase this.

Meanwhile, he has asked the government’s spending watchdog to review his party’s economic plans.

Money would be provided for Wales, Scotland and Northern Ireland, but it would be up to the governments there to decide whether to spend it in the same way as England.

At the Labour Party conference the shadow chancellor claimed families had lost £1,500 a year in childcare support under the current government.

In other Labour conference developments:

Ahead of his speech to the party faithful Mr Balls told the BBC the policy would be “a huge change and really welcome for families getting out to work”.

Call them what you like. The squeezed middle. The strivers. The politicians have a tricky task. They haven’t made them better off. But they desperately want their votes.

These are the people who will decide the next election. And if the parties can’t appeal to these increasingly sceptical section of the electorate direct – then they will try to appeal to them through their children.

So, last week, the Lib Dems tried to prove there is such a thing as a free lunch – school meals for infant school kids irrespective of their parents’ income. Every little helps.

The Conservatives, too, tried to force down the cost of childcare by changing the adult/child ratio in nurseries – that is until their coalition partners stopped it.

All the parties have to convince the “strivers” that they are not soft on welfare and that they will spend wisely. Hard pressed parents will also want reassurance that policy pledges aren’t just for the conference season but are for real.

Hence Labour’s offer to have all its tax and spending plans independently audited.

It’s a measure of how far trust in politics has fallen amongst floating voters that it’s been felt necessary to suggest this. So the next election won’t simply be fought on the doorsteps – or in TV studios – but in the nurseries and school rooms too.


“That’s a clear and costed commitment showing that even in tough times, when there’s going to be less money around, we will make a difference,” he added.

He said that “for the first time” parents would be able to work part-time “without having to worry about the cost of childcare”.

In his speech in Brighton Mr Balls also claimed the government’s banking levy had raised £1.6bn less than expected.

He said: “At a time when resources are tight and families are under pressure, that cannot be right. So I can announce today the next Labour government will increase the bank levy rate to raise an extra £800m a year.”

Labour’s policy pledge comes shortly after the government announced that all pupils at infant schools in England will get free school lunches from next September.

On Saturday, Ed Miliband said he would “legislate for a primary school guarantee that every school is an 8am to 6pm school”, although party officials said schools could band together to offer the opening hours between them.

But asked about so-called capital spending – on building and infrastructure projects – he said: “We won’t make that decision until we see where we are on the economy in a year and a half’s time.”

In a separate move, Mr Balls said on Sunday that he had written to the Office for Budget Responsibility to ask it to review his pledges for the economy – although it would have to have its remit changed to be able to do so.