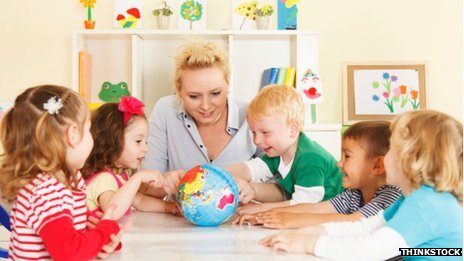 The Liberal Democrats are promising 15 hours of free childcare for all two-year-olds in England, as they begin to set out their policies ahead of the next general election.

The pledge, which the party says would be met by 2020, would extend the provision already in place for those from poorer households.

The Lib Dems say this will help working parents to cope with costs.

The move comes amid persistently low opinion poll ratings for the party.

The Lib Dems are keen to show they are distinct from their Conservative coalition partners in the run-up to next May’s general election, although the coalition is set to remain in place until polling day.

They say they will fund most of the £800m childcare plan by abolishing the married couples’ tax allowance, pushed through the coalition by the Conservatives despite Lib Dem opposition.

The Lib Dems say they want to go further, when resources allow, to extend the free childcare offer to all children aged nine to 24 months where both parents – or one in a single-parent household – are in work, before later increasing the maximum of hours funded by the state from 15 to 20.

These longer-term ambitions would cost an estimated £2bn a year.

Liberal Democrat business minister Jo Swinson said: “Helping families with the cost of childcare is part of the Liberal Democrat plan to build a stronger economy and a fairer society where there is opportunity for everyone to get on in life.

She added: “This is ultimately a fundamental difference in values. Liberal Democrats want to help all families with childcare support and nursery education right the way through from the end of parental leave to the start of school.

“The Tories are more bothered about helping only some couples through a married couples’ tax break.”

A Conservative spokesman said the party made “no apology for recognising marriage through the tax system” and said it did not “come at the expense of childcare”.

The allowance will be worth up to £200 a year from next April to married couples where one spouse does not work.