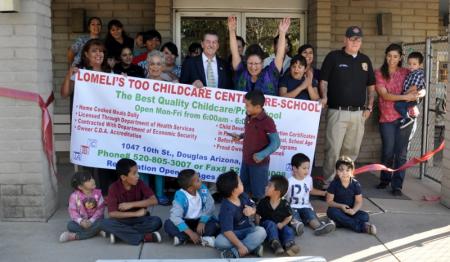 On Oct. 17, Angelita Lomeli celebrated the grand opening of Lomeli’s Too Childcare Center, located on 1047 10th Street in the old Lestonnac pre-school building.

Lomeli opened her first childcare center in April 2007, located at 1240 23rd Street, which will continue to remain open.

Owning a childcare center was a dream for Lomeli for many years and with the help of her family and friends she now has two establishments in Douglas.

She began her childcare career as a teenager taking care of the children of family, friends and neighbors.

As an adult she received her Arizona Department of Economic Security (DES) childcare license 1982 and then her group home license.

After that she earned her Childcare Development Associates (CDA) Degree as well as the licensing and certifications required to open her own childcare center.

In 2007 she transformed the old Red Barn restaurant into her first official childcare center.

Lomeli knew that renovating the Red Barn into her dream would be hard and difficult work, but this did not seem to stop or slow her down.

Once she became established as a reliable form of childcare Lomeli was once again given the opportunity for her dream to grown a little bigger with a larger establishment.

At the new location she will be taking children ages 3-12, those who are 3 years old and older and potty trained will be moved from the 23rd Street location the 10th Street one. There will also be an after school program that is available until 6p.m. Monday – Friday including holidays.

The new location has the basic set up as the original childcare with more room. There are toys, games and activities suited for each age group.

The children follow a basic daily schedule that includes activities that promote their motor skills, work time for school age children to complete their homework, outdoor activities and free choice time.     The children are also provided breakfast, a mid-morning snack, lunch, an afternoon snack, dinner and an evening snack depending on which session the child is in.

There is an art area for children to learn creative expression through the exploration of art. There is also a theater area for the children to express make believe and roleplaying.

For the older children there are computers with software to reinforce math, science and reading skills. There is a library area to encourage reading. The music area enhances language skills, body awareness and rhythm through the exploration of music.

The children learn the concepts of size, weight and numbers by playing with blocks in the block area.

A separate room is specially designated for the younger children which has a place for nap times. The staff of the center meets the needs of Douglas’ multilingual and multicultural community. Classroom instruction and conversation is provided in English and Spanish. With a large section of the population being English Limited Learners, the staff strives to develop a stronger foundation in English while supporting the child’s native language.

Educationally Arizona is an English only state, so children with good or improved English skills have an easier transition into the public schools system.

Lomeli has made some minor changes to the building including making the small library into a work area for her staff and providing a food prepping area that was not there before. The new location does not have a kitchen and all meals will be prepared at the 23rd Street location and transported to the new location.

In addition to these small renovations she has made some changes to the playground area, adding swings for the older children and sandbox areas.

Lomeli has worked hard to establish and maintain a safe, healthy environment for growing children, to expand their minds and lives.

Over the years Lomeli has developed her own philosophy regarding childcare on which she built the center.

“You have to take care of the kids from the heart. A child is a gift of God and a most precious one it is,” she said.

Lomeli’s Too is opened Monday – Friday from 6 a.m. – 6p.m., including holidays. Lomeli and her staff are first aid and CPR certified, licensed and regulated with the Depart of Health Services. For more information contact Angelita Lomeli at (520) 805-3007.

If you find a correction for this story, please contact our editorial department