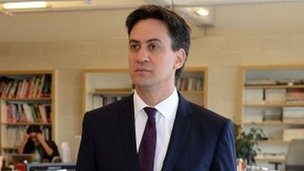 Parents in England face a “childcare crunch” as they struggle with soaring nursery costs, Ed Miliband is to say.

The Labour leader will also cite the closure of Sure Start centres – aimed at helping disadvantaged children – as evidence of broken coalition promises.

Labour has pledged to extend free childcare for three and four-year-olds.

Deputy PM Nick Clegg says there is “money to maintain” Sure Start – and the government has launched free “pre-school support” for poor families.

On a visit to a nursery school, he will say: “The Tories say they care about families but they have done nothing to help for three years while all the time adding to the stress and strain of family life.

Mr Miliband will point to Ofsted figures suggesting there are 35,000 fewer childcare places in England since September 2009.

And he will repeat Labour’s pledge to extend free childcare for three- and four-year-olds from 15 to 25 hours per week for working parents, to be funded by increased taxes on bank profits.

He will also accuse Prime Minister David Cameron of breaking a promise to preserve the network of Sure Start children’s centres, brought in by the previous Labour government to support low income families.

Some 576 Sure Start centres have closed but the government insists it is up to local councils to decide on their future – all they have done is remove the ring fence from the central grant that funds them.

“The money is there to maintain the Sure Start centre network,” Deputy Prime Minister Nick Clegg told the BBC’s Andrew Marr programme.

He said the government was launching a scheme aimed at the “20% lowest income families”, which would offer 15 hours of pre-school support for two-year-olds in England.

He also trumpeted the Pupil Premium – the Lib Dems’ flagship policy to pump money into schools in deprived areas – which he said was starting to “close the attainment gap”.

The cost of nursery places has risen by 30% since 2010 – five times faster than pay, according to the Office for National Statistics.

The average bill for a part-time nursery place of 25 hours a week has increased to £107 over the same period, according to the Family and Childcare Trust.

Three out of 10 of the most disadvantaged two-year-olds have still to be found a place on the government’s new scheme, figures from the Department for Education show.