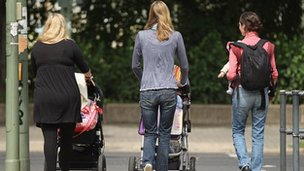 The cost of nursery care and out-of-school care varies significantly across Scotland, according to a new report.

The study by Family and Childcare Trust and Children in Scotland said there was an 80% variation in the cost of nursery care and a 92% variation for over-5s.

It indicated that while the price of nursery care appeared to have stabilised, out of school care costs had increased.

The Scottish Childcare Report covered the year from December 2011 to 2012.

As well as sharp variations in costs, it also found that about 40% of local authorities did not know if they had sufficient childcare for working parents, making childcare a postcode lottery for parents.

Of the councils that had some knowledge about the supply of childcare in their local area, there was a particular shortage of childcare for older children and disabled children, it claimed.

The report said more than half of all families in Scotland had used grandparents for childcare purposes in the past six months – the highest proportion in the UK.

Children in Scotland Policy Officer Jim Stephen said: “We welcome the findings that childcare costs for young children have largely stabilised, but are concerned that the costs of out of school care appears to have increased.”

The research found that nursery care for a child under two-years-old in Scotland cost an average of £100 per week.

A parent buying 50 hours of care each per week could face an annual bill of nearly £11,000.

The highest fees in Scotland were £235 per week for 25 hours, it said.

The report also found that childcare costs at an after-school club for those aged over five averaged £50.46 per week, which was a 3.9% increase on the previous year – higher than the rate of inflation.

Based on full time attendance, a parent with two children of primary school age could face a bill of £4,000 per year for after-school care during term time.

The data was collected under the promise of anonymity for councils to avoid league tables and comparisons that do not reflect the complexity of the childcare market.

The report stated: “Access to high quality, affordable childcare is essential for parents, enabling them to return to or remain in work or to undergo training or education.

Earlier this year First Minister Alex Salmond pledged to make childcare in Scotland the best in the world.

Legislation has already been presented to the Scottish Parliament in 2013.

This includes a legal guarantee of 600 hours of free nursery education per year for every aged child aged three and four from 2014, and similar provision for vulnerable two-year-old children who are looked after by local authorities.

Anand Shukla, chief executive of the Family and Childcare Trust said: “We welcome the first minister’s commitment to make Scotland’s childcare the best in the world, but our research shows more needs to be done.

“We believe legislation should be introduced to ensure there is an obligation on local authorities to assess childcare provision, enabling them to intervene in the childcare market place and helping create a stronger Scottish economy by bringing down barriers to employment.”

Children’s Minister Aileen Campbell said: “It is vital that we get nursery and out-of-school care right to give children the best possible start in life and support parents to take up employment and training opportunities.

“While keeping Scottish nursery costs below the UK average and stable can be welcomed, we are determined to make high quality childcare more affordable for Scotland’s families.”

She said the legislation already proposed would save families about £700 a year.

She added: “We want early learning and childcare to be flexible and meet the needs of the local community and parents as set out in the new legislation and we are looking at provision of out-of-school activities and the particular challenges faced in rural areas highlighted in the report.”