Parents should get 25 hours free childcare every week, says Ed Balls in another raid on the banks

Parents would be offered 25 hours a week of free childcare under Labour plans to cut bills for families.

But shadow chancellor Ed Balls faced criticism for planning to fund the policy with another raid on banks, having already earmarked the bank levy for 11 other policies. 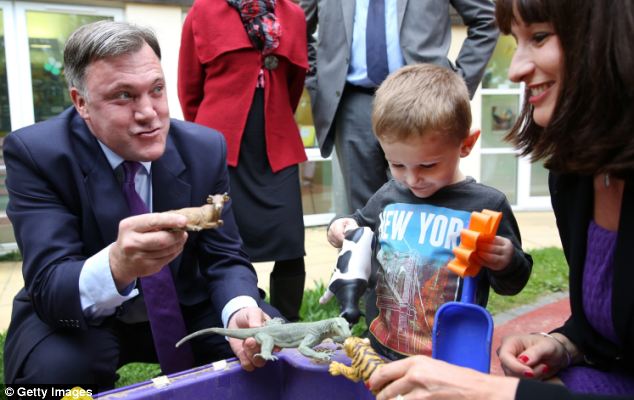 Labour has repeatedly pledged to raise more money through the bank levy to fund other policies, including a Youth Jobs Guarantee, reversing the VAT increase, more capital spending and reversing cuts to tax credits and child benefits.

But Mr Balls used his speech to the Labour conference to argue that bankers can also pay more to cut childcare costs.

Parents of three and four year olds already receive 15 hours a week free childcare, paid for by the taxpayer.

The coalition has also introduced the help for the poorest families of two-year-olds.

Mr Balls suggested a Labour government will go further and increase the help for three and four year olds to 25 hours.

Pledge: Mr Balls will promise to increase free childcare from from 15 to 25 hours a week

He told the conference:
‘Childcare is a vital part of our economic infrastructure that,
alongside family support and flexible working, should give parents the
choice to stay at home with their children when they are very small and
to balance work and family as they grow older.

‘But
for many families high childcare costs mean that it doesn’t even add up
to go to work. So to make work pay for families, we must act.

‘Conference, after the financial crisis, it is right that the banks make a greater contribution. But in the last financial year, the banks paid a staggering £2.7 billion less in overall tax than they did in 2010. Over the last two years the Government’s bank levy has raised £1.6 billion less than they said it would.

‘At a time when resources are tight and families are under pressure that cannot be right. So I can announce today the next Labour government will increase the bank levy rate to raise an extra £800 million a year.

‘And we will use the money, for families where all parents are in work, to increase free childcare places for three and four-year-olds from 15 hours to 25 hours a week.

‘For the first time, parents will be able to work part-time without having to worry about the cost of childcare. Making work pay, tackling the cost-of-living crisis, a radical transformation in the provision of childcare in our country.’

Mr Balls told activists the party must show how its policies are costed and funded, saying the ‘British people rightly want to know that the sums add up’.

Labour has already announced plans for primary schools to guarantee t offer childcare from 8am to 6pm, to help working parents.

Mr Balls made the announcement in a speech to activists where he will also attempt to underline the party’s ‘iron discipline’ on spending in the run-up to the 2015 general election.

‘There are no uncosted spending commitments. There will be no more day-to-day borrowing from Labour in 2015.’ 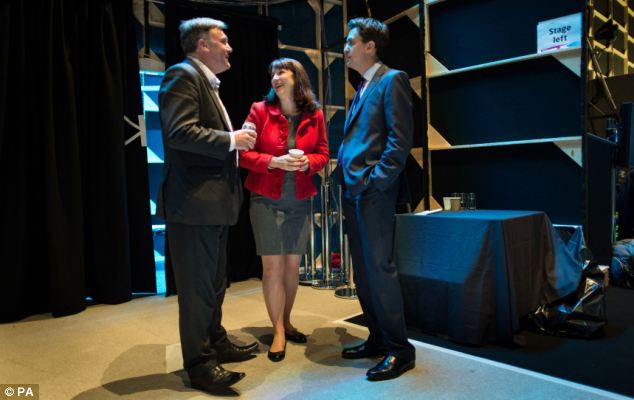 However, a political row erupted over Labour demands for the independent spending watchdog to audit their manifesto.

Mr Balls wants the Office for Budget Responsibility to be allowed to check Labour’s tax-and-spend promises ahead of the 2015 election to prove their sums add up.

‘Mr Balls told Daybreak: ‘We think this is something we
can get cross-party support for, to say that the Government and the
opposition should have that independent scrutiny and audit, so when we
say in our manifesto this is our tax promise or our spending commitment,
we can show the sums add up, but also the independent OBR can say they
have certified and scrutinised that.

‘It’s about rebuilding trust
in politics. There is cross-party support for the OBR and I want this
to be for governments and oppositions. I am confident that when the
Government thinks about this they will give us that cross-party
support.’

But Conservative Treasury minister Sajid Javid said: ‘Ed
Balls knows this is not allowed under the Budget Responsibilty Act and
the OBR’s charter, so this is just a stunt to try and distract attention
from the fact that Labour have been found out for making unfunded
commitments that would just mean more borrowing and more debt.’

This guy is an idiot

The man is talking balls..!

No doubt plenty of gullible mothers will vote for ‘free’ childcare, oblivious to the fact that they’ll be voting for the continued destruction of Britain and all that it once valued.

I am beginning to wonder if KEN DODD is writing there manifesto for them,,LOL.

This lunatic needs to be certified

No, parents should fully consider the cost of having children BEFORE they have them. You breed ’em, you feed ’em.

Minibrain and Balls up give us yet another reason not to vote for Labour so between them and Camerons lies it only leaves UKIP.

i understand the comments saying its not free, tax payers are funding it, but its for working parents. So they both will be paying tax too. For lower earners it will probably be a gain, but longer term the tax payer will benefit as the women will stay in the work force and not lose thier skills. Its much harder to get into work after a long career break, than it is to increase your hours when the early years are over. Personally i hate this push for mothers to be good little tax payers, but i do see that a woman who never leaves the workforce will pay more tax than the childcare costs over her career.

I see Labour are at it again, have more kids and those mugs known as the taxpayer will fund them for you. No doubt there will also increases for those on benefits and the work-shy.

And how will this be funded?