Rise of the 'mumpreneur': As price of childcare soars by 20% in a YEAR, 65% of mothers want to launch own businesses …

Soaring childcare costs in the UK are prompting more mothers than ever to start their own businesses from home.

A new survey has found that two thirds (65 per cent) of mothers with children under the age of ten are considering launching their own business in the next three years.

The dramatic rise in childcare costs mean that the annual expense of full-time childcare is £11,700 for two children. 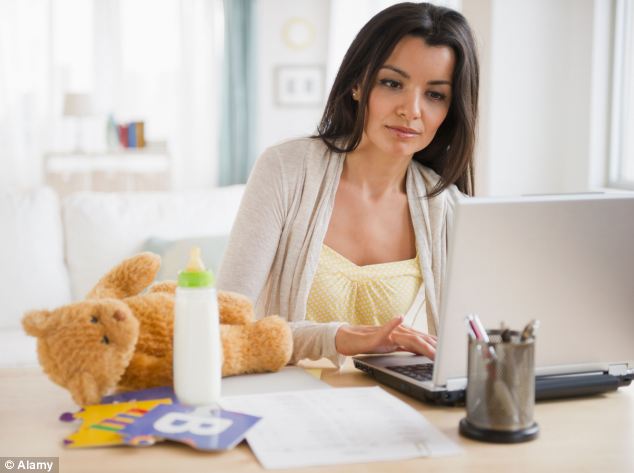 Working mothers: 49 per cent of mothers questioned in a new survey believe that they would be financially better off if they started a business from home

The research, by insurers Direct Line, found that nearly half of mothers questioned – 49 per cent – believe that they would be financially better off if they started a business from home.

One in five British mothers say they (20 per cent) also believe they’d be able to spend more time with their children if they didn’t have to go in to an office every day.

One in six (16 per cent) think they’d save money on childcare if they eschew traditional nine-to-five, office-based jobs.

One in seven mums (14 per cent) are motivated to start a business from home by the flexibility of being their own boss.

One in eight (12 per cent) have always had the ambition to start their own business.

Only one per cent is motivated by the fact that they do not like their current job.

Jazz Gakhal, Head of Direct Line for
Business, said: ‘The costs of sending a child to day care, or hiring
a nanny continue to spiral.

‘It’s great to see that mums are tackling
this problem with such an entrepreneurial spirit, as they understand
considerable child care cost savings can be made by running a business
from home.’

‘WE TURNED INTO MUMPRENEURS AND WANT OUR BUSINESS TO GO GLOBAL‘

Kerry Marriott, 37, and Rachael Forder, 42, from Southsea, Hampshire, used their mothering skills to think up a lucrative business and, in 2012, successfully launched the LumiPotti: a potty which lights up to help young children with toilet training.

They thought of the idea when they realised their own youngsters were finding it difficult to locate the toilet in the dark.

‘Rachael used a transparent potty with a night light underneath and I plugged a night light in to the wall nearby,’ Kerry told Mail Online.

‘Our children liked the idea that they could get up and find the potty on their own at night. They were quite proud of themselves.

‘It wasn’t 100 per cent fool proof but it proved really effective. We started telling other parents about the method and they said it had worked for them.’

The LumiPotti successfully sells online and the women hope to make it a ‘global brand.’ 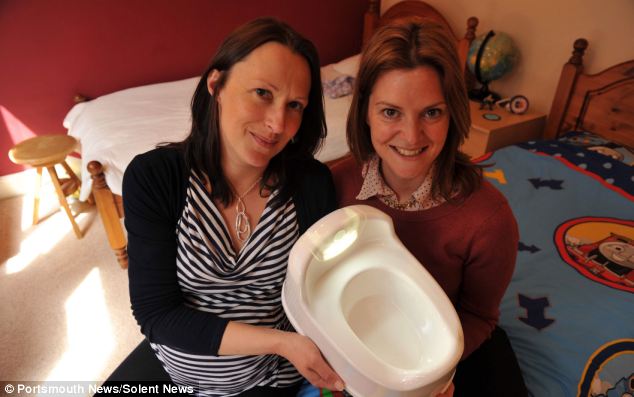 As the government has just agreed to increase the funding for childcare its obvious the cost of it is going to go up. Parents and tax payers are being conned left right a centre by the childcare centres. I cannot believe the number of accidents children in childcare centres have and no one seems to be bother. I would never send one of my children to these places. You have children to love, care for and raise as a family giving them your time.

As a company director who works 60 hours a week, sometimes to 2am in the morning, I always laugh at these women who think that running a business is something you can just do between dropping your kids off and picking them up. If only! It’s incredibly stressful, tiring and expensive.

2am in the morning?? As apose to what? 2am in the afternoon?

The old fashioned way is to work, not be a stay at home mum? Wonderful how many presume men are too useless to be parents.

I am an mum and I run a business, I despise the term mumpreneur…I am an entrepreneur.
It’s not an easy option, if you really want to run a successful business you will work harder than in any ‘normal’ job, initially for less money and sacrificing time with your children. Fed up with party plan mums calling themselves businesswomen.

bit up yourself then

Oh for god sake! Can the tax payers calm down just a tiny sec! These working mums are paying tax too!!

It’s too expensive to pay someone else to look after your children but then the price of living means most women can’t rely on their partner to provide because their wage alone is not enough!

This article is not as negative as some of the comments! Is it not a good this these mums want to work and are busting their guts to think of ways to, wait for it … HAVE IT ALL! It’s not ‘have it all’, they are trying to ‘DO it all’ and we’re tired of it!

Great idea Sadie. I’ll just send you my bank details so you can bankroll me then I’ll quit my job, since my partner earns an average salary in a climate which demands a two salary household for a mortgage (unless you have money thrown at you from mummy and daddy). Unless the bank let you not pay for your house because you’ve churned out a couple of kids?

Firstly, the average mother has always worked. Its a myth that the working mother is a modern concept, its been around for centuries. Women worked in mines, factories, in the fields etc.
Secondly, what about the dads? Why can’t they look after their own children, why are father’s entrepreneur and mother’s are mumtrepreneurs?

It’s not about men or women doing what- it’s about not being able to survive on one salary!!! These days you need 2 in order to live and remain housed! Child care costs are immense and even if u do work they take up a considerable amount of he second wage!!!!!! That’s why woman are looking to work and save on child are costs!!! It’s called bing clever!!! Idiots!!

Fed up of my Facebook being full of posts from girls I went to school with inviting me to their houses or to place orders for a vast amount of complete dirge. Jamie at home, aloe Vera shakes, Tupperware, tarty PVC outfits and dribble bibs for toddlers. Bore off

And don’t forget Scentsy candles. I get plagued by those!

OR stay at home and do your job as a MUM and then you don’t need to worry about childcare costs. You know, the old fashioned way.

It’s ok to do that if u don’t need 2 salaries to cover mortgage and bills and live!

Lucy if someone can’t afford to pay for those things and have kids then they should wait until they can before they start a family. That’s what my husband and I did.

Source Article from http://www.dailymail.co.uk/femail/article-2609339/Rise-mumpreneur-As-price-childcare-soars-20-YEAR-65-mothers-want-launch-businesses-home.html?ITO=1490&ns_mchannel=rss&ns_campaign=1490
Rise of the 'mumpreneur': As price of childcare soars by 20% in a YEAR, 65% of mothers want to launch own businesses …
http://www.dailymail.co.uk/femail/article-2609339/Rise-mumpreneur-As-price-childcare-soars-20-YEAR-65-mothers-want-launch-businesses-home.html?ITO=1490&ns_mchannel=rss&ns_campaign=1490
http://news.search.yahoo.com/news/rss?p=childcare
childcare – Yahoo News Search Results
childcare – Yahoo News Search Results