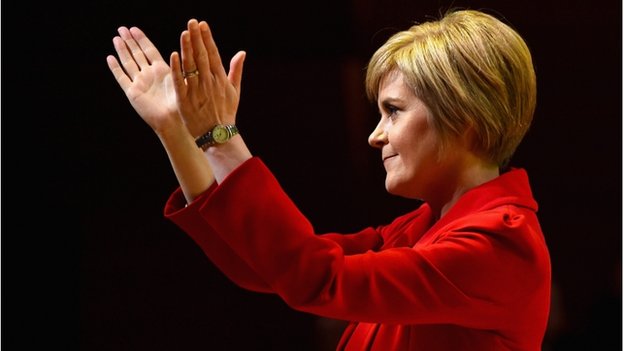 Nicola Sturgeon has pledged to double the amount of free childcare available for three and four-year-olds in Scotland if the SNP wins the next Holyrood election.

The new SNP leader unveiled the ambitious plans at the party’s conference in Perth.

It would see the number of free hours increase from 16 to 30 every week.

Ms Sturgeon said she wanted to give every child – regardless of background – the best opportunity in life.

And she said a call earlier this week by business lobby group the CBI for an extension of free childcare showed that industry leaders recognised its importance, not just to the lives of children, but also to the economy.

The SNP had made free childcare a central part of its campaign ahead of September’s independence referendum.

Ms Sturgeon told delegates at the conference: “In the referendum, we proposed free comprehensive provision for all children from aged one. We didn’t win the referendum, but I am determined that we will make progress.

“With the powers we have now, we will push forward. We already deliver 16 hours a week of free childcare for all three and four years old.

“From August next year, that entitlement will extend to 27% of two year olds as well. That is more hours of childcare than in any other part of the UK and we should be proud of that.

She pledged that the SNP’s manifesto for the 2016 Holyrood election would set out an “ambitious plan” to increase childcare provision.

“By the end of the next parliament, my commitment is that all three and four year olds and all eligible two years olds will receive, not 16 hours, but 30 hours of free childcare each week,” she said.

Ms Sturgeon acknowledged that the scale of the plan would require major investment, including capital investment in school and nursery buildings.

She added: “Our flagship infrastructure project in this parliament has been the new Forth Bridge – the Queensferry Crossing.

“I want to make one of our biggest infrastructure projects for the next parliament a different kind of bridge.

“I want it to be comprehensive childcare, giving our young people the best start in life and a bridge to a better future.”

Recalling her own childhood, Ms Sturgeon said she had grown up in a working class family, went to a state school and, thanks to “hard work, great parents and free tuition”, became the first person in her family to go to university.

She said: “Education – above all else – is what has made it possible for me to stand here today.

“Not everyone can be first minister. But everyone – regardless of background and circumstance – should have the opportunity to fulfil their potential.

“For too many of our young people today, that is not the reality. Stories like mine are still too often the exception. We must change that and, conference, I am determined that we will.”