You are here:
Home
Article 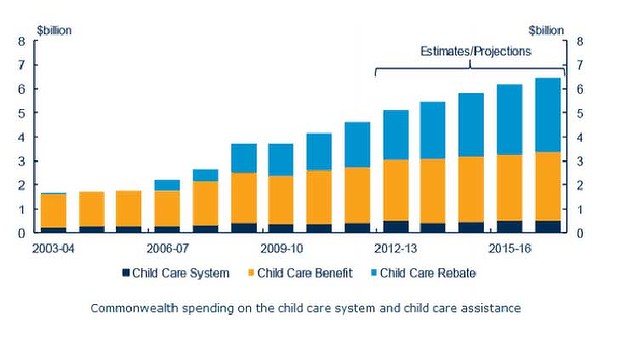 So what’s the point of the mishmash of present and proposed parental leave and childcare policies?

Whether it’s a highly discriminatory “big new tax” from Tony Abbott and the Greens, Labor’s minimalist parental leave payments, the growing blowout in the means test-free childcare rebate, direct government subsidies of select childcare workers’ wages or the reduced baby bonus, the main political parties are competing to throw money at the means without defining the ends beyond several, er, motherhood statements.

This can be a dangerous arena for a male commentator to enter. Just using that old phrase “motherhood statement” can induce hissing in certain quarters. When there are competing interests hard at work to grab increasing amounts of government (i.e. taxpayers’) money – never mind some very strongly held views on everything from women’s rights to child welfare, plus burgeoning growth industries that make novated lease salary sacrificing look like a cottage industry – well, there’s a lot at stake.

And stalking the whole circus, as usual, is the Law of Unintended Consequences. Rather than lifting female workforce participation and advancement and improving the welfare and potential of the nation’s children, the attempts to give female voters more of what they really want could result in weaker career prospects for women, little gain in the participation rate and no improvement where quality childcare is most needed.

Abbott’s pledge to refer the childcare business to the Productivity Commission (PC) is most welcome but, if he was genuine, his parental leave policy would be included in the reference and not implemented without a big PC tick – which it would be most unlikely to receive. Childcare and maternity leave are merely different aspects of the same issue.

A full reference might address that opening question of just what the priorities are, prioritise them and then apply some rational cost-benefit analysis to spending.

Is it primarily about productivity growth through greater workforce participation or maximising the potential of our children? Is it about trying to let women have it all, trying to make up for our individual relationship and employment failings? The reality is that the nation would find it very difficult to afford all of the above.

There’s no shortage of advocates for more and better at all levels of childcare and parental leave, from tax-deductible au pairs to quality childcare so cheap that the lowest paid can afford it. (Wants are famously unlimited.) So let’s consider just a few counter possibilities, starting with a little honesty about parental leave: it’s really maternity leave.

Yes, there are a few exceptions to every rule but it’s maternity leave. Our personal relationships mostly haven’t evolved to full equality in the parenting business – and maybe shouldn’t – so the taxpayer is being asked to get involved in the nursery to balance things a bit. Talk to people in offices having to cover someone on maternity leave, or plan around having a temporary team member or keep a position open while someone is on maternity leave and, yes, it’s maternity leave.

And not everyone is happy about that. ABC breakfast television last week looked at the Labor and Liberal childcare policies and reported a heap of viewer responses along the lines of: “They’re your children, not the taxpayers’!”

There’s the possibility that existing maternity leave regulations play a role in employers allegedly preferring men and women being paid, on average, less than men.

Work might be a fungible commodity in the minds of the human resources empires of the big bureaucracies, public and private, where it’s just a matter of dropping another peg into a hole, but smaller teams aren’t so easily shuffled, where more commitment is required than what might come from knowing the job only lasts six months or a year or can be dropped into and out of regularly.

The maternity leave that suits one worker’s job security might not suit that of another worker temporarily filling her shoes. Few things are more frustrating for a team’s manager than finding the fill-in is a much better performer than the permanent, but being forced to hand the job back to the permanent and let the temporary worker go.

It’s fair to ask to what extent highly paid, government-enforced maternity leave would be pushing social reform policy onto employers.

And if it is broad social policy, making only those companies showing a profit of more than $5 million pay for it is highly iniquitous. Whacking on a federal payroll tax would at least be somewhat logical.

In any event, the outcome of making highly paid maternity leave universal is far from certain, partly because its goal is indistinct beyond making the opposition leader appear more female friendly.

Is maternity leave at full pay of up to $75,000 for six months supposed to encourage women to return to the workforce quickly or to encourage them to have babies – a bigger, better form of baby bonus for the relatively well off?

If we want to encourage breeding instead of importing cheaper, fully formed and educated citizens, that’s fair enough – but if it’s about female participation rates, will it help?

A rich maternity leave system might make having a baby more affordable but after returning to work for long enough to meet whatever requirements are set, it can also make it easier to leave the workforce again. Labor’s miserable minimum wage scheme ensures most families will quickly be worse off and in need of the extra pay packet.

This isn’t an attempt to say which system we should collectively decide we want but a call to be mindful of the consequences and costs and how it will be paid for.

Labor funds its cheaper system out of general revenue.

The Liberal Party wants a big new tax just on companies that show a profit of more than $5 million, so Google and its fellow tax avoiders won’t contribute – nor will two classes of business that employ women who will be among the most expensive recipients: the legal and accountancy partnerships.

But maternity leave is relatively easy compared with childcare. This is where the big dollars are already starting to run away with the budget and childcare is increasingly expensive anyway, where there’s a conflict between the most efficient use of resources for the best outcome for children and what the majority of middle- and upper-class women (i.e. voters) want.

As the accompanying graph shows, the federal cost of childcare is on the way from a couple of billion dollars when Labor was elected to the better part of $7 billion in 2016-17 with most of the growth coming from the childcare rebate – that big whack of social welfare or engineering that escapes any means test.

Yes, if Mrs Packer wants a break from the kiddies, she can drop them into the right sort of childcare and receive up to $7500 back from the rest of us.

Yet despite the big subsidy, childcare costs of the “approved” variety continue to skyrocket and prohibit those most in need of quality care – the young children of the socially disadvantaged – from being able to afford it.

Which is where the social equity question comes in: who is childcare primarily for – the mother, the child or the childcare worker? Is it an economic or sexual equality question? And, as the ABC tweeters might ask – whose children are they?

The reality is that the children of the well-off don’t need quality childcare as they tend to have it already. And they certainly don’t need the taxpayer to provide it. It’s the children of the poor and marginalised who desperately need it if we want a little social engineering to avoid further degradation of Australia’s relative egalitarianism, to preserve the idea of equality of opportunity in this country.

At that end of the scale, the social taxpayer’s dollar is indeed needed. There’s not much of an immediate economic case for paying childcare workers a decent wage to look after the children of women who earn less or nothing and market forces certainly won’t take care of it.

Which brings up the question of childcare costs. It is completely reasonable that people who want to work in childcare also would like to receive a living wage. Professionalising the industry is one way of achieving that – or at least unionising it – as the preference of one obvious party.

Yet mandating the quality of care – the ratio of carers, how many must be university trained, the number of square metres per child – can make the business so expensive as to become self-defeating.

And the university thing for middle-class children – really? There is a legion of grandparents providing childcare without a university qualification in early learning studies. Does that retard the children’s chances of becoming merchant bankers? And those backpackers doing a bit of nannying (and emptying the odd dishwasher which is why the government won’t let them become a tax deduction) can provide a rich experience in their own way if the structure already exists.

There is something wrong with an industry when the government feels the need to specifically subsidise the wages of selected workers in that industry. That’s what’s happening in child- and aged care. At least in the car industry the wages subsidy is somewhat indirect.

This column doesn’t pretend to have the answers to the childcare conundrum but more questions need to be asked of it instead of letting the issue run as an unexamined vote buyer.

Bring on that Productivity Commission inquiry, as long as it includes maternity leave – that’s if the PC is game to touch an issue rife with PC issues, if you know what I mean.

And if you really want trouble, lurking behind maternity leave for six months and institutionalised childcare thereafter is Michael Leunig’s confronting Thoughts of a baby lying in a child care centre cartoon. That most sensitive of cartoonists was pilloried for daring to pose a question that many would prefer to leave unasked. I somehow doubt the PC would want to go near that bit at all. 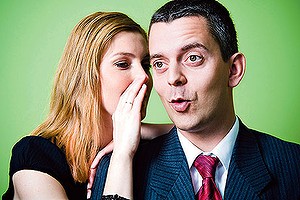 The trouble with office gossip

Around the workplace water cooler, some things are clearly better left unsaid.


On Your Bike: Cyclists: coping with road rage

The driver had deliberately rammed my bicycle’s back wheel. What was I to do?


Style: Can men dress themselves?

Sure, they’re becoming more stylish, but is it at the expense of individuality?

Five things you thought you knew about drinking are little more than tipsy tales.