Will free childcare really be free? 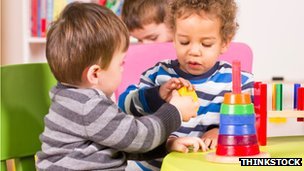 There can be no doubt that the high cost of childcare tops the list of most working parents’ concerns.

With nursery and childminder fees rising to crippling levels in some parts of England, it is often the basis on which many new parents decide whether to return to work.

So the promise of more free childcare is always going to be a popular move.

But is the childcare on offer really free? Answer – probably not.

The first rule of thumb of any offer of free childcare in England is that it is seldom totally gratis at the point of use – despite protestations to the contrary.

Unless you are lucky enough to live close to a state-maintained nursery, attached to a school or children’s centre, you are more than likely going to be asked to pay an unofficial top-up fee.

Now a straight extra hourly fee is not strictly legal, as nurseries are not allowed to charge parents who take up the free entitlement any extra for doing so.

But they have a number of ways of getting round this.

The most common technique is requiring parents to take more than the set number of free hours (currently 15 hours a week), and charging a set fee for the extra time. This extra time can be as little as 15 minutes on top of a three-hour session.

One nursery in south-west London requires parents of three- and four-year-olds to pay £28 per three-and-a-half hour morning or afternoon session. So that’s £28 for the extra half an hour’s care each day.

At five mornings a week that’s a weekly total of £140.

There are also registration fees and one-off administration charges. It all seems a bit unfair, until you realise that the average value of the hourly Nursery Education Grant is only about £3.75 an hour.

At about half the national minimum wage, it is clear why nurseries in the independent and voluntary sector are having to get parents to make up the difference.

Chief executive of the National Day Nurseries Association Purnima Tanuku points out that since the “free” entitlement for three- and four-year-olds was introduced in the mid-2000s, the hourly average has not increased.

“It was inadequate when it came in and it was not even linked to inflation,” she says, adding: “We are still fighting these battles even now.”

“This has been the biggest problem with the free entitlement, and the more hours they then extend it to, the more difficult it will be to provide.”

The devil may be in the detail with this”

She adds: “While parents will welcome the extra help with childcare it is vitally important the funding for these extended hours is thought through properly.

“Childcare providers are already working with a system which is not fit for purpose and leaves the majority making a loss of £700 per child, per year on funded places for three- and four-year-olds.

“It is these inherent problems which are pushing down pay for childcare workers and making the sector unsustainable for childcare providers.”

These concerns are echoed by Neil Leitch, chief executive of the Pre-School Learning Alliance, which represents 14,000 independent settings.

He says: “This is a fantastic idea in theory, but it stands no chance of working if it is inadequately funded. At the moment the government’s subsidies for the 15 hours a week of the free early years entitlement do not fully cover the costs of providing these childcare places for three- and four-year-olds.

“Should the number of hours increase by 40% to 25 hours a week, this must not be costed at or near the current underfunded rate of around £3.79 per hour as this will further marginalise childcare providers across the country and exacerbate problems around childcare sustainability, which is currently a major issue in the sector.”

But it is not only the pounds side of this numbers equation that makes this pledge even trickier to fulfil than it is right now. It’s the people side too.

According to recent population predictions, there is a second baby boom due to hit the nursery sector in – yes you’ve guessed it – about three or four years’ time.

So capacity in an already already hard-pressed area could well be a key issue for the delivery of this policy.

Beatrice Merrick, chief executive of Early Education which represents state maintained sector nurseries, says “the devil may be in the detail with this”.

She adds: “Will the choice of hours be led by supply or demand? Will parents be able to choose whether to spread the entitlement over three days or five or will providers offer what suits them? Will it be straightforward for parents to split their entitlement between a nursery place and a childminder to match the hours they need?”

And detail is in short supply with this announcement. Labour has said little more than where it will come from – an increased banking levy worth £800m.

But it has said it will be consulting widely over the plan, its details and how flexible it will be.

A Labour spokesman said: “It is important that we get the detail right for the sector and to ensure that it works smoothly.”